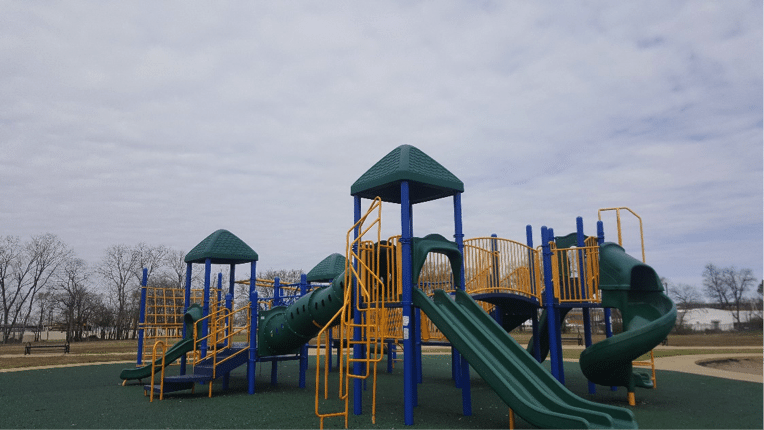 After conducting an air study around three major public high schools, I decided to conduct some testing around Birmingham’s local parks. The five parks tested were Elyton, Lynn, Greenwood, Avondale, and Homewood Park. I tested each park over a period of three days, and I spent around five minutes walking around each park.

On the first day of testing, I noticed how different the parks were from each other. In Elyton and Lynn Park, there were no people around. I was quite happy by this development, because I would not have to explain to any civilians why I was carrying around a weird looking device! Greenwood Park was also empty, except I saw an airplane flying over the park. Due to this observation, I assumed that Greenwood would have a high level of pollution. At Avondale and Homewood Park, there were actually people walking around and playing tennis. I even saw geese near the lake in Avondale, and I was taken away by the beauty of the architecture.

On the second day of testing, Elyton and Lynn Park were still empty of my fellow human brethren. While at Elyton Park, I did hear a very loud noise. It sounded like an engine or really strong wind. After checking the weather data, the wind was only travelling around 9 miles per hour, so I concluded that there may have been an airplane flying by that was out of my line of vision. I actually saw other people at Greenwood Park, and even a cute little dog enjoying the park’s playground and basketball court. The geese were at it again at Avondale Park, except they were enjoying the scenery under the playground steps. I am so glad that I was able to capture a picture of their relaxed awesomeness. I concluded my journey at Homewood Park, where there were so many people walking around.

The final day of testing was pretty interesting. I actually saw another human at Elyton Park! He was enjoying a morning stroll, while I walked around the park collecting data. Next, I went to Lynn Park where I discovered that there was another part of the park that included a small playground, so I made sure to collect data near that part of the park. At Greenwood Park I, once again, observed a few people playing basketball. While at Avondale and Homewood, I noticed that there were so many people around. I tried to walk for more than five minutes in both parks, because both parks are at least twice the size of the other three, and I wanted to collect as much data as possible. After returning back to work, I realized that no pollutant particle data was recorded for Avondale, because the AirCasting app apparently crash and froze while I was there collecting data. 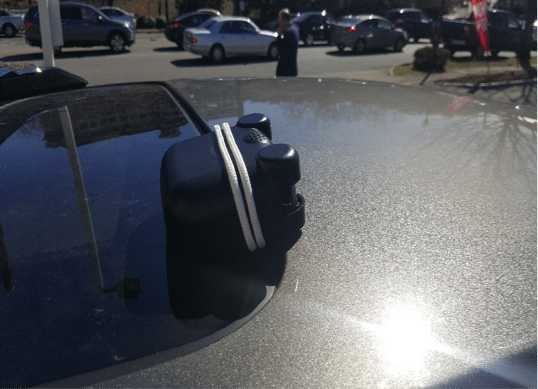 The sunroof was closed almost completely shut, except for a tiny space to allow the rope to go through. This allowed the AirBeam to be securely placed at the top of my car. Sometimes the AirBeam would move around if I drove too fast, but for the most part, its movements were really small.

I decided to test the air quality close to three Birmingham city high schools: Mountain Brook, Homewood, and Jackson-Olin. The reason why I chose those three high schools is because they are in different areas in Birmingham, and each high school represents a different socio-economic bracket. I did not test the data on school grounds, because it’s against the law unless consent is given by the schools, but I would park around a minute away from each high school and collect the data on a public road. I just wanted to emphasize that I am a law-abiding citizen, and that jail would seriously deter my plans to graduate college in 2018.

In order to get the most accurate results, I decided that it would be best to test the air quality on three different days, using the same path each day, and starting the testing around the same time. I also tried my best to avoid highways, because I wanted to collect data in areas that were in close proximity to people that were outside.

I created a sheet that helped me organize the data collected. If you would like to conduct your own data collection study, you can print this sheet out.

The weather on the three days I tested were, coincidentally, quite different. On the first day of testing, I unfortunately forgot to take a pic near my first site, Mountain Brook High School, but I was able to take pictures of my other two stops.

[huge_it_slider id=”1″]
Note: Although only three days of data are mentioned in this article, I actually tried to collect data on more days. For example, on one extremely cloudy day, it started raining after I collected data near Mountain Brook. The data was still collected and used as an average for Mountain Brook. I tried to delete it from AirCasting, but I realized that it does not let you delete any of the data once it has been sent to CrowdMap. I initially tried to make the number of testing days equal for all three high schools, but some unforeseeable circumstances has allowed some high schools to have more data than others. 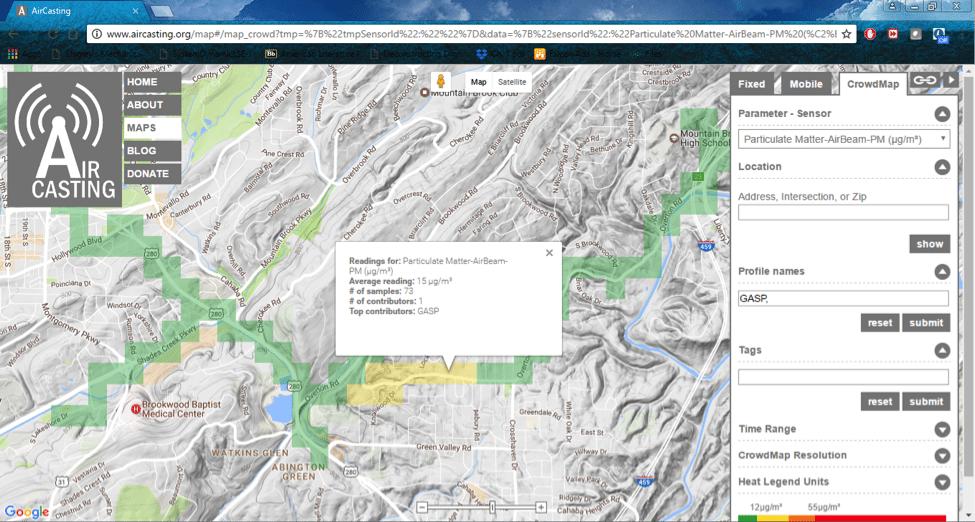 The AirBeam Saga Part I: Installation and Connection to AirCasting

[Editor’s Note: Be sure to click on the images to enlarge them, especially if you plan to try this at home.]

Before I conducted my pollution study around the city of Birmingham, I needed to test the AirBeam itself. The AirBeam is a portable air monitor that is used to collect pollutant particles. You can purchase an AirBeam at http://www.takingspace.org/aircasting/airbeam/. Once I saw the small box the AirBeam came in, I got really excited. Surely, this will be an easy setup and execution…right? Thankfully, after some mistakes, I was finally able to get the setup and execution right. I hope this rundown will prevent you from wasting your time, and make your use of the AirBeam an easy and carefree process.

First of all, the box the AirBeam came in was really small. Unfortunately, that meant that there was no instructor’s manual. The manufacturing company, thankfully, did in fact leave a blue card in the box. Displayed on the card was a link to an online website that had more information on how to use the AirBeam. 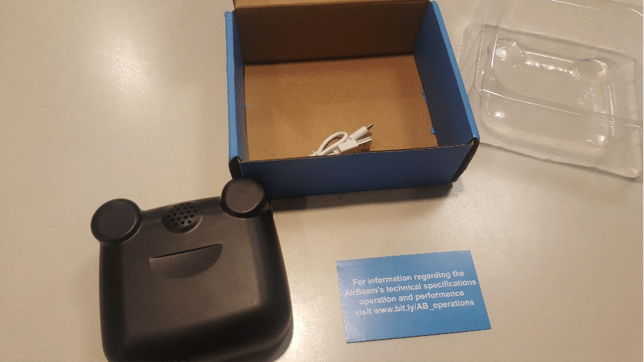 The website which is found on the card is www.takingspace.org, which is the same website that was used to purchase the AirBeam. It was really helpful in understanding the different parts of the AirBeam. It also introduced me to the app AirCasting, which is used to map all of the data collected from the AirBeam. An important thing to note is AirCasting is currently only available to Android users. The website didn’t really explain how to connect to AirCasting, except that AirBeam and AirCasting are connected via Bluetooth. After many tries and Youtube videos, I was finally able to figure it out.

First, you need to download the AirCasting app from the Play store on your phone. It’s free so don’t worry! 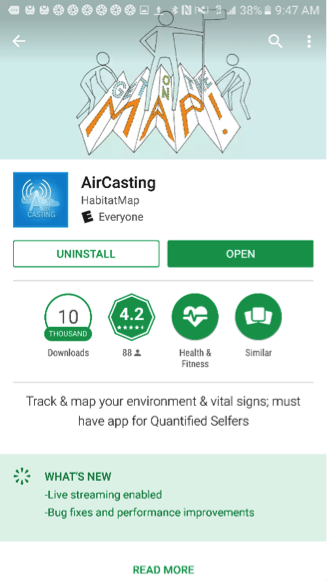 Then, you should turn on your phone’s Bluetooth. A device with the name “AirBeam” should appear. Make sure to pair the AirBeam with your phone until it becomes part of the paired devices. I noticed that the first couple of times I connected my phone to the AirBeam, a passcode popped up on the screen. Write the passcode on a piece of paper, because you will need that later on. It’s also important to note that the passcode changes with each connection. So if a disconnection occurs with the Bluetooth, you need to write down the new passcode. After using the AirBeam a couple of times, I noticed that a passcode stopped appearing. That might occur to you too and that’s okay! It just means that the AirBeam stayed as a paired device, and so no passcode is needed. 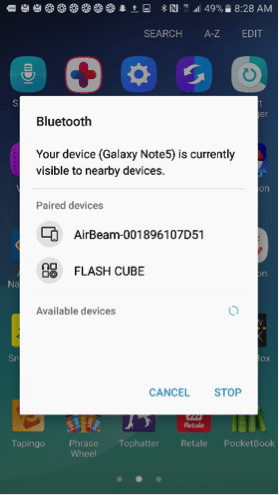 By the way, please disregard the words “FlashCube” in the picture above. It is another device that I have connected to my phone. It is irrelevant to the AirBeam.

Open the AirCasting app and hold onto your phone’s back button for a couple of seconds and this should appear: 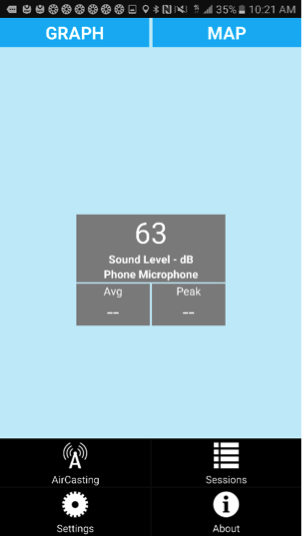 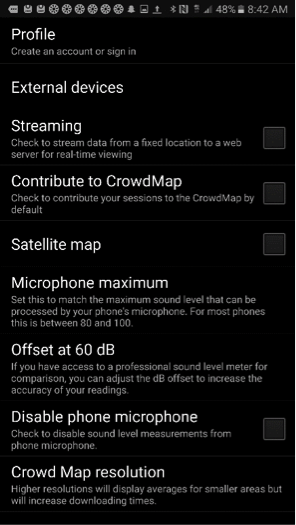 After making the account click on “External Devices”, and click on “Connect” next to the word AirBeam. At this point, a popup asking for the passcode will appear. Put the passcode in and it should connect. 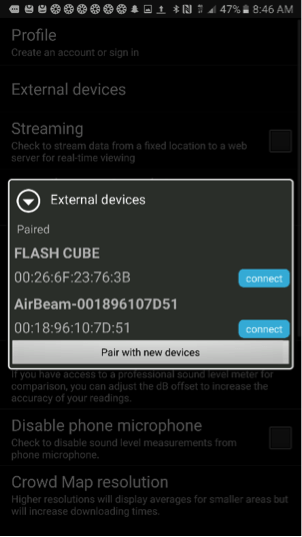 You will be correctly connected if this appears: 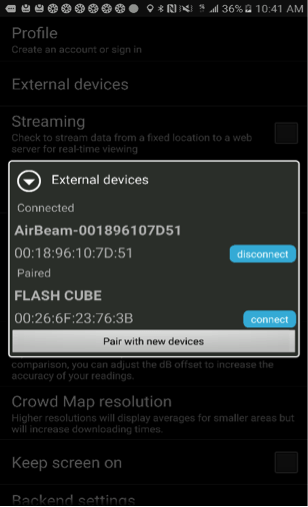 After that click on your phone’s back button to go back to the main page of the app.

Now is the time to use the AirBeam. Turn on the AirBeam. The dark red bulb should now display a light red light. If the AirBeam is connected correctly to the AirCasting app, the light will blink a couple of times, then become solid red like in the picture below. From time to time, the light might blink again and that is also fine. Be careful, because if the light is blinking consecutively, then that means the AirBeam is not connected to the app properly, and you need to repeat the above steps again. 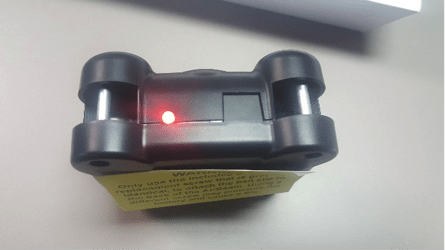 Go back to the AirCasting app and click on “Start Recording.” This should appear: 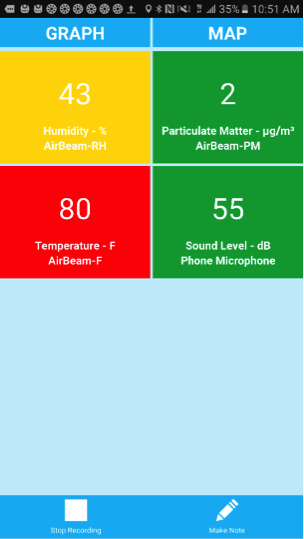 It will sometimes switch to this: 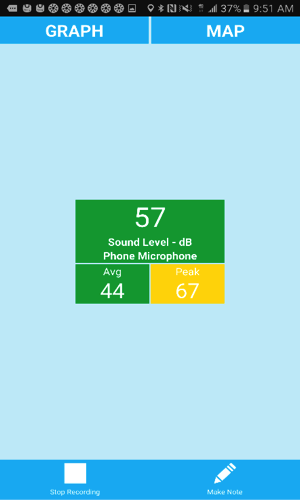 Click on “Stop Recording” whenever you have finished collecting the data. AirCasting will ask you to input the session details. 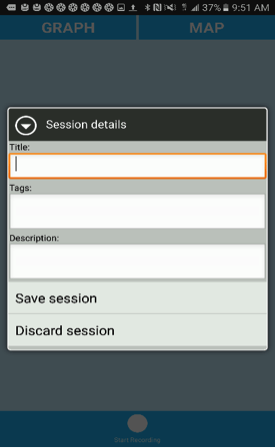 You will then be asked if you want to contribute to CrowdMap. Click: “Yes, save and contribute.” 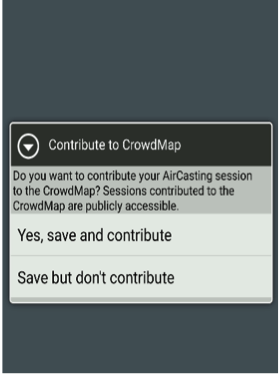 To access CrowdMap to see if your data was collected go back to www.takingspace.org and click on “Maps” in the upper left corner. 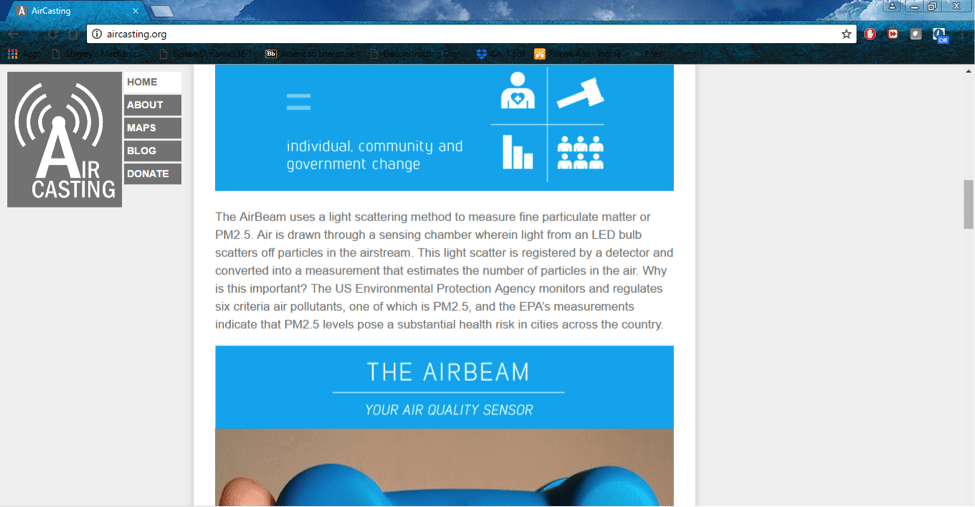 After clicking on “Maps”, a map similar to this should appear: 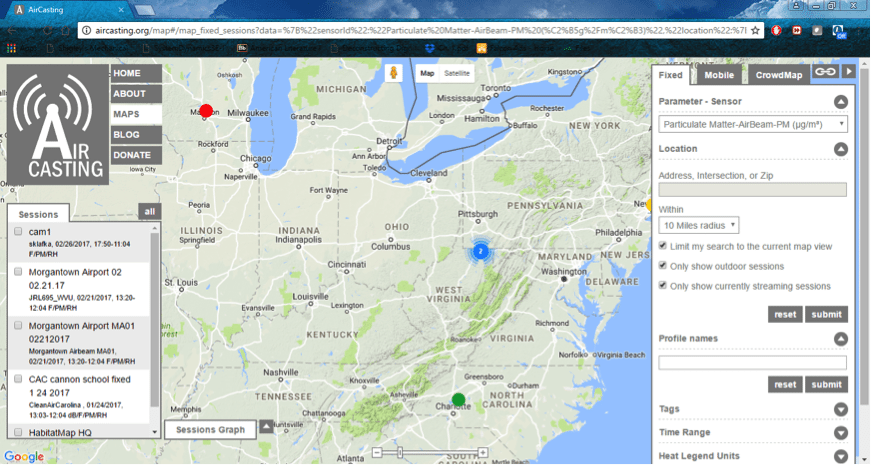 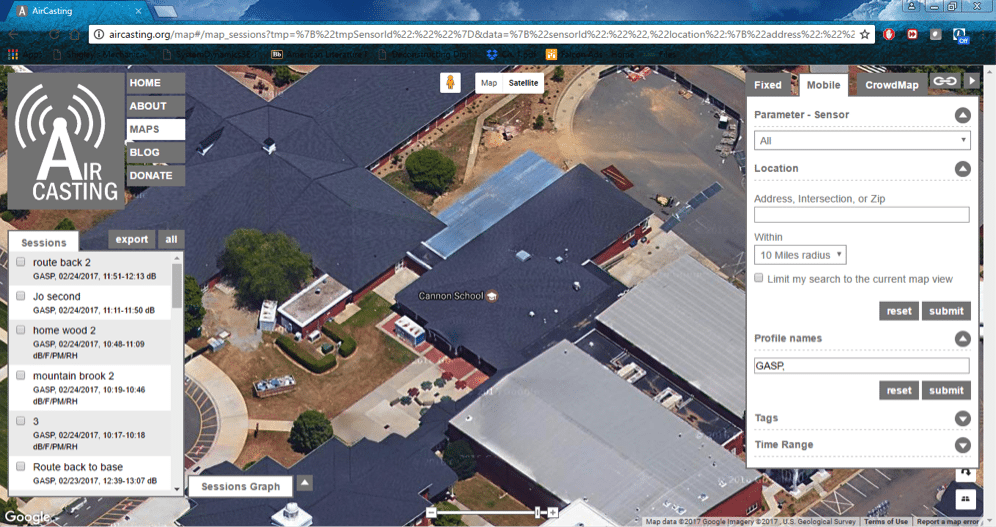 Click on any one of the data points you collected under “Sessions” and you will have something like this appear: 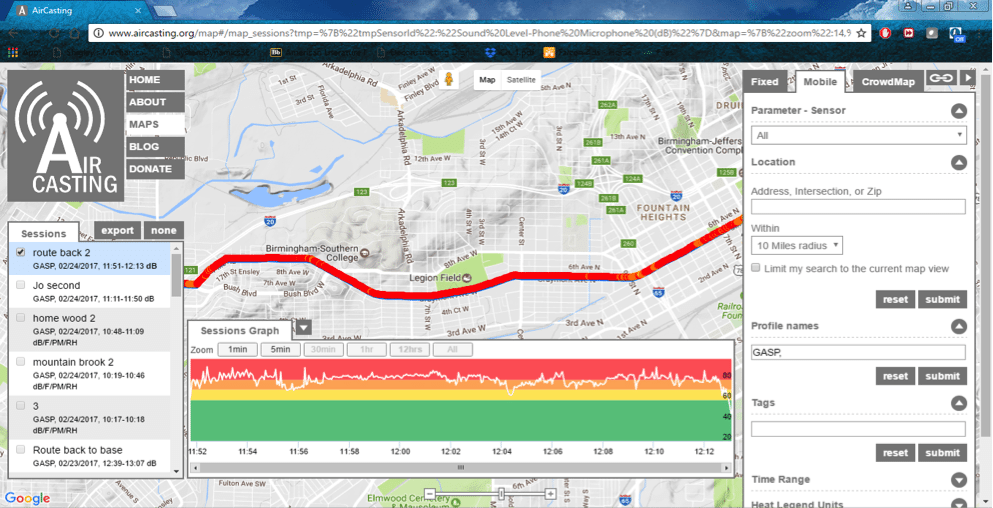 My favorite part of AirCasting is the CrowdMap. Click on “CrowdMap” in the upper right corner. Search for your results by putting your profile name under “Profile names.” Then click on the “Submit” button. You might need to click the “Submit” button a couple of times until the “Sessions” section at the left of the page starts to display your results. You might also need to wait while the map is being loaded.

The colored squares on the map are your results. Zoom in by clicking on the plus sign at the bottom of the page. This will really help you follow the path you took during data collection, and actually show you more readings. The more you zoom in, the more squares appear unless you collected data at only one point. 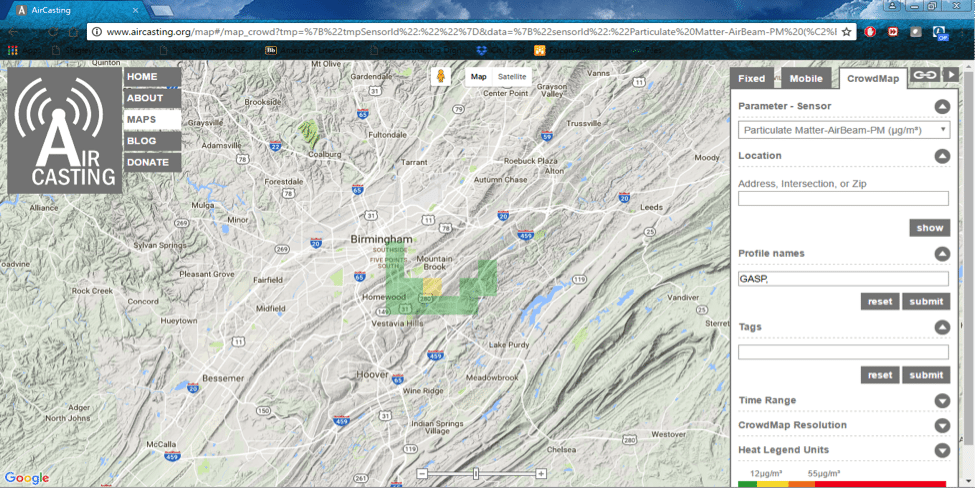 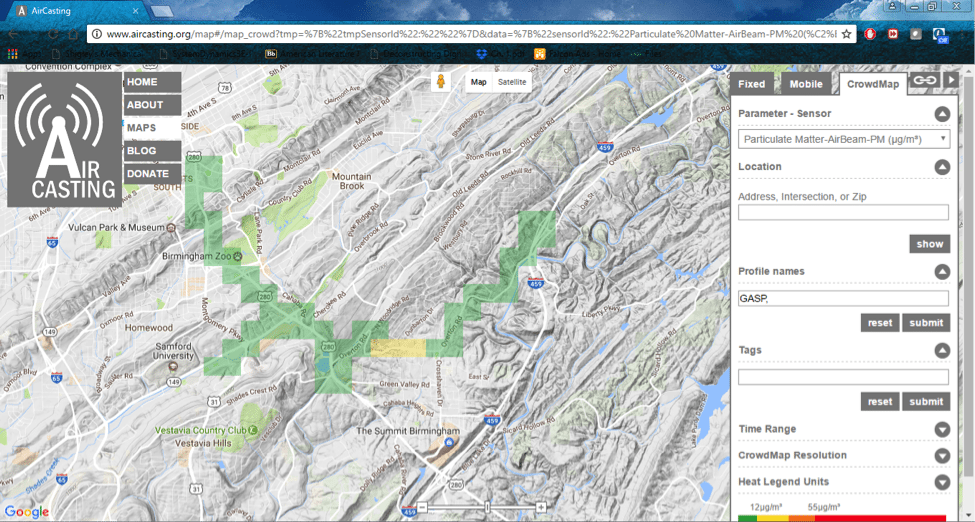 Clicking on different points of the data squares will show the average reading value taken at that point. 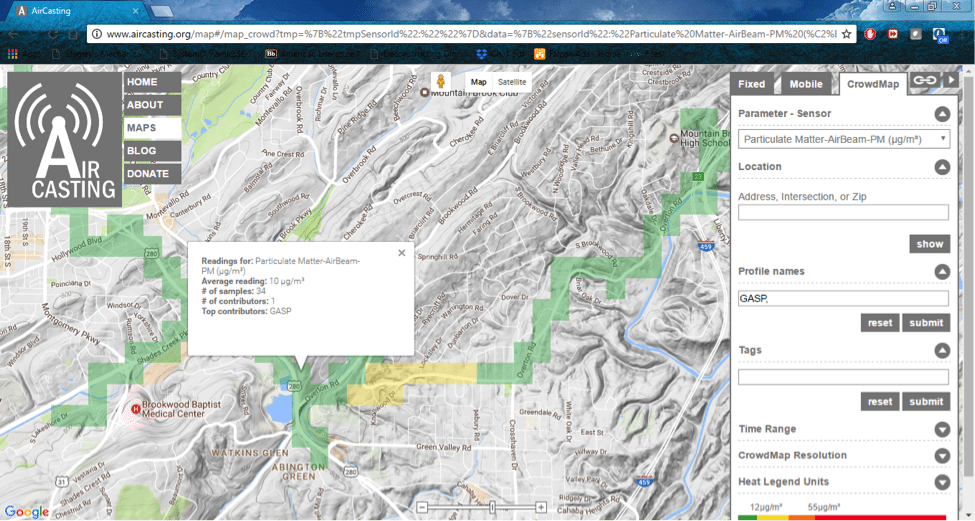 Make sure to check back here next week, because I will show you how to connect the AirBeam to your car. I will also share my results with you. If you have any questions or issues, leave a comment below or email me at [email protected].