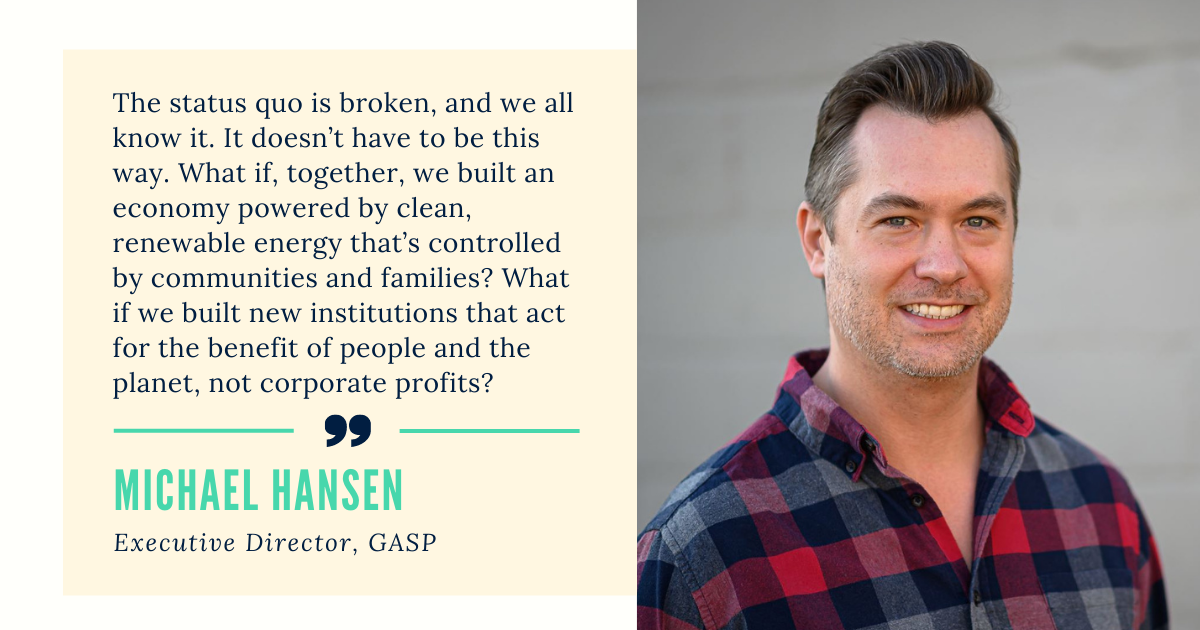 I just returned home from Glasgow, Scotland, a couple of weeks ago. I was there to attend the United Nations’ 2021 Climate Change Conference of the Parties, better known as COP26. The message from environmentalists and climate scientists alike was clear: “We’ve been warning you about the dire effects global warming would have on our ecosystems and civilizations if we don’t stop burning fossil fuels ASAP — and the chickens have come home to roost. The climate crisis is here!”

Some of the stories I heard were excruciatingly painful. But it’s not just some far-off problem that we in the U.S. can ignore. Right here at home, the people and places we all love are being devastated by stronger storms, more frequent floods, harsher droughts, and unprecedented wildfires. Billion-dollar storms are becoming more and more frequent at home and abroad. And we know why: since the Industrial Revolution, greenhouse gases from extracting and burning fossil fuels have caused atmospheric carbon dioxide levels to rise to levels not seen in millennia. This heats the planet, overall, and alters climate patterns.

This crisis is not simply a carbon problem, though. It’s a matter of justice. Why do I say that? Well, climate change will affect everyone everywhere. The question is, who can afford to recover and adapt? Wealthier people and nations are in a much better position to respond to the climate emergency. From reactive measures like disaster response to proactive measures like building more resilient homes, the developed world can afford to do what it takes to prevent the worst of the worst outcomes.

Meanwhile, the developing world and small island states — particularly in the Global South — are being hit the hardest by climate change and have fewer resources available to prevent or recover from climate disasters.

And we in Alabama are a part of the problem. Alabama Power’s coal-fired Miller power plant in western Jefferson County claims the number-one spot on a national list of the worst greenhouse-gas emitters. The behemoth plant cranks out 19 million tons of planet-damaging gases each year. It’s a big reason Jefferson County gets an ‘F’ grade on air quality every year. Alabama Power is doubling down on fossil fuels, too. The company plans to add an additional 1.9 GW of methane gas generation to the grid over the next couple of years at a cost of more than $1.1 billion to ratepayers.

Breathing isn’t optional, so we, the people of the Birmingham area, are forced to breathe dirty, dangerous air. We also pay some of the highest electric bills in the country, by the way — subsidizing the true costs of climate change and air pollution for the monopoly utility company.

Our economy relies on fossil fuels. Most of Alabama’s electricity comes from dirty coal and methane gas. Our cars, trucks, and planes run on gasoline. Our grocery stores and retail shops are filled with plastics made from fossil fuels. And when it comes to alternatives, Birmingham keeps falling behind: we now rank 88th out of America’s biggest 100 cities for clean energy. All the while, profit-obsessed corporations, like Alabama Power, and the politicians who do their bidding continue to use and abuse our communities for a buck.

The status quo is broken, and we all know it. It doesn’t have to be this way. What if, together, we built an economy powered by clean, renewable energy that’s controlled by communities and families? What if we built new institutions that act for the benefit of people and the planet, not corporate profits?

That’s why GASP conceived of the Green New Deal for Birmingham initiative, a people-driven campaign to develop a roadmap for climate justice for the City of Birmingham. This is not a top-down project. This effort is being led by the grassroots — everyday people living throughout Birmingham’s 99 neighborhoods. The campaign is prioritizing responsible energy policy; clean air, water and land; and economic development that is sustainable environmentally as well as economically.

The burdens of our fossil-fuel-dependent economy fall disproportionately on poor people, Black communities and other communities of color, and people living near polluting facilities. Generations of them have been harmed by this cruel, extractive economy. It’s no wonder they want future investments to focus on equity. They see justice as a bedrock principle for fixing broken systems like transit. They also believe our government must be transparent about how decisions are made, how plans are executed, and how money is spent.

A Green New Deal for Birmingham offers a tremendous opportunity to grow The Magic City in sustainable ways that can help reverse our population loss and attract a new generation that seeks purpose with its paycheck. We don’t need new stadiums and concrete parks. We need a bold vision for a kind and clean economy. A justice-centered climate action plan will provide Mayor Randall Woodfin and City Council the roadmap they need to do more than talk. We’re going to make it easy to walk the walk and make good on campaign promises.

We are all in this together. I invite you and your neighbors to join us in shaping the Green New Deal for Birmingham. Let’s build a healthier, more sustainable, more prosperous future for this magical city we love.

Every year on the Tuesday following Thanksgiving, nonprofit organizations all over the world participate in #GivingTuesday. This is an opportunity for people to give back to their communities and make the world a better place, one dollar at a time. In these times of uncertainty — from the pandemic to the climate crisis to attacks on democracy itself — your support is vital. Our movement is strengthened by your dedication. Thank you in advance for your generous contribution!