For many people, unhealthy air is synonymous with smog — the dirty fog that blankets most major urban and industrial areas. Ozone, the primary ingredient that makes up smog, is one of six criteria air pollutants regulated under the National Ambient Air Quality Standards (NAAQS), which is set by the U.S. Environmental Protection Agency under the Clean Air Act.

Ozone is a chemical compound made up of three oxygen atoms, or O3. There are two different kinds of ozone: natural (good) and ground-level (bad). Natural ozone is found several miles above the Earth’s surface in the upper atmosphere. This is the ozone you may have studied in your high school chemistry class. It gives us a layer of protection from the sun’s damaging ultraviolet rays. 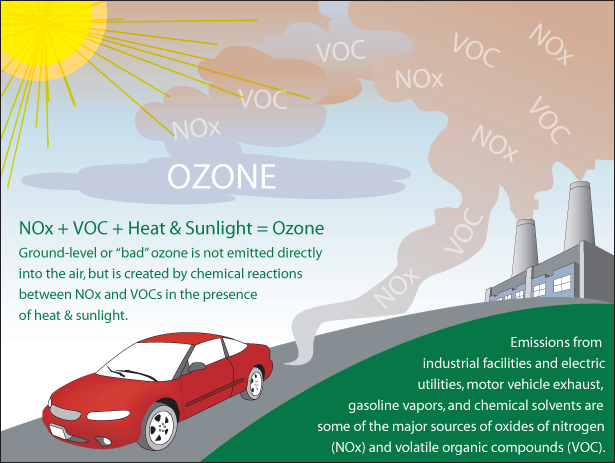 Ground-level ozone, the bad kind, is created via a chemical reaction of air pollutants emitted from cars, industry (e.g., power plants and factories) and other sources. Specifically, ground-level ozone is formed when nitrogen oxide (NOx) and volatile organic compounds (VOCs) combine to react with sunlight.

According the the American Lung Association’s 2014 State of the Air report, Birmingham ranked 23rd among the metropolitan areas with the most high-ozone ozone days in 2013.

Ground-level ozone occurs most often during hot summer months. Breathing ozone can have dangerous health consequences. Those most at-risk include people who exercise outdoors, children, pregnant women, the elderly, people with lung conditions (such as asthma, chronic bronchitis, and emphysema), and people with heart disease.

On November 25, 2014, the EPA proposed strengthening the ground-level ozone standard from 75 parts per billion (PPB) to a range of 65 to 70 PPB. Please join GASP in support of stronger ozone standards and better health for you and your family. The deadline is March 17.