Some examples of sustainable development and resulting outcomes could include healthy people, using renewable resources for energy production, such as solar and wind, and greenspaces, such as parks, lakes, or forests.

Attendees of the Community Climate Assembly heard from Tina Mozelle Braziel, a Birmingham-based poet, as she did a poetic reading to ground the Assembly before getting started. Volunteer members of the GND4BHM Planning Team facilitated conversations around Sustainable Development in our communities, and the group held reflections following the two breakout sessions. Some fascinating discussions came out of this Assembly and were synthesized during a meeting following the Assembly.

The People’s Movement Assembly defines synthesis as “a combination of ideas to form a theory or system.” Synthesis is crucial because it allows us to reflect on things that came up during the Assembly and find core agreements, disagreements, and necessary mandates.

Attendees expressed that they wish Birmingham were more walkable and bikeable. Better walkability would include having sidewalks around the city connecting residencies to grocery stores, restaurants, etc. This level of walkability is exemplified in the Highland Park area, where restaurants and places of work can be reached by walking from residents’ homes. Another core agreement surrounded access to fresh and healthy foods; attendees agreed that all parts of Birmingham should be able to get fresh produce.

Breakout groups determined a couple of mandates during the Assembly to address the issue of unequal access to fresh produce. First, Birmingham needs to push for good, affordable grocery stores to be in places where there currently are none. Secondly, Birmingham needs to subsidize homegrown food and personal gardens; this could look like using vacant land for community gardens and working with youth to develop the gardens.

Another agreement made at the Assembly was the community’s concern regarding air pollution, especially for the North Birmingham neighborhoods surrounded by pollution-emitting steel and coke plants. To help with problems relating to air pollution, attendees agreed that air and water pollution regulations are vital for the City of Birmingham. All of these agreements came out of questions such as:

These questions required attendees to think about sustainable development in their daily lives.

This data is essential for the community and the Green New Deal for Birmingham Campaign because it gives a voice to the Birmingham community, which is extremely valuable. The Green New Deal for Birmingham aims to create a people-driven, justice-first People’s Climate Action Plan, and we can’t do that without hearing from the people. The synthesis meeting after the Assembly provided space to boil down conversations that took place at the Assembly into their most essential parts, providing a clearer view of what people living and working in Birmingham want their city to look like and how Birmingham can improve into a more sustainable city.

Each Community Climate Assembly centers around one of the six pillars of the Green New Deal for Birmingham campaign. So far, members from the Greater Birmingham community have come together to learn about sustainable development and clean air, land & water and have had conversations about what our Magic City can look like when we implement sustainable practices.

Register to attend our next Community Climate Assembly on November 3rd. 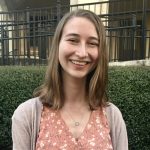 About Perry Dowell
Perry graduated from Agnes Scott College with a degree in Business Management and a minor in Environmental and Sustainability Studies, knowing that environmental work was where she wanted to go with her career. In college she worked with several nonprofit organizations including Southeast Energy Efficiency Alliance, Roots Down, and with her school’s Center for Sustainability. Perry is passionate about working to help people and our natural environment against environmental injustice and the harmful effects of climate change. She believes that these are some of the most important issues of our time and is very excited to be coordinating the Green New Deal for Birmingham Campaign. Perry loves taking care of her many indoor house plants, spending time outside reading, and hanging out with friends or family.