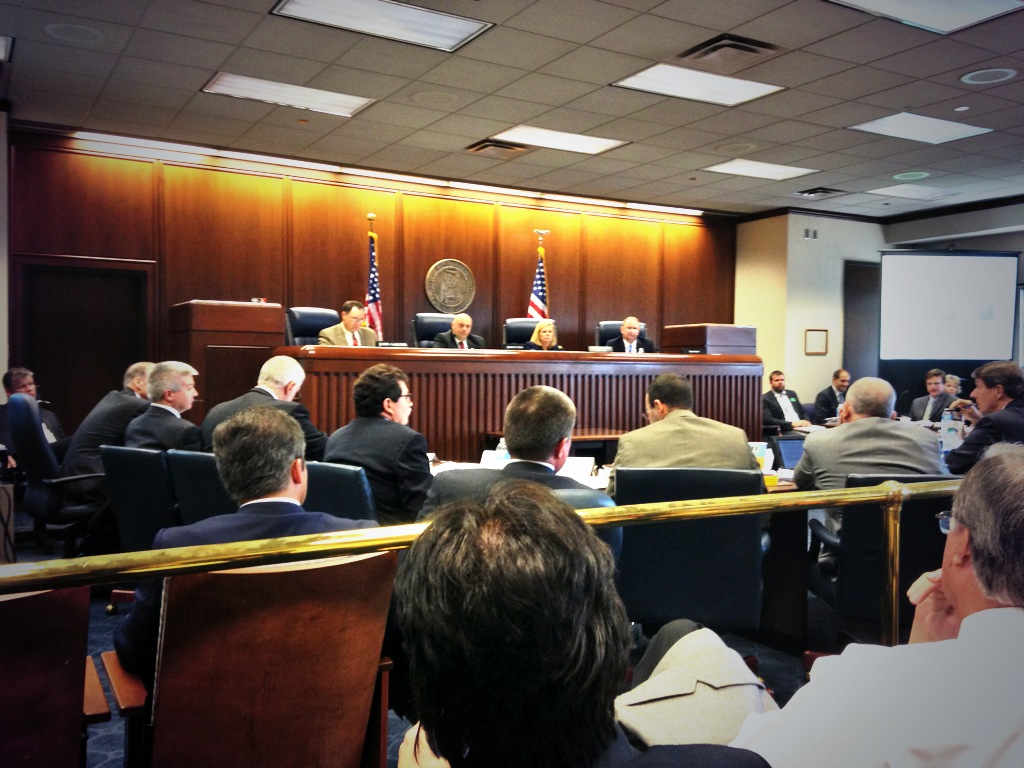 The Emperor’s New Clothes: Alabama Power and the PSC

From its roots as the original G.A.S.P. (Greater Birmingham Alliance to Stop Pollution) in the 1970s to its reincarnation today, Gasp has long fought for clean, healthy air in Alabama. Recently, we stepped up our efforts by taking part in the Alabama Power rate proceedings at the Public Service Commission.

At the conclusion of those proceedings, Gasp’s executive director, Dr. Stacie Propst, penned a thoughtful, evidence-based op-ed published in The Birmingham News. Her piece triggered a personal attack from one of the front groups for Alabama Power, the coal industry, and other power brokers who desperately want to maintain the status quo for political and financial gain. This harangue directed at our organization is published on al.com if you’re interested in reading it.

In this attack, the author does not address any of the facts supporting Dr. Propst’s conclusion that “Cavanaugh has rhetorically and erroneously tied the well-being of Alabama’s coal mining industry to the burning of coal in Alabama Power plants.” (A tactic many in the media have called out for the blatant attempt at misdirection that it is.) As stated in her essay, “Alabama Power is importing 70 percent of the coal it burns in its power plants.” In other words, Alabama’s coal industry is tenuously connected to our state’s electricity production.

Not only that, but the relationship between coal jobs and coal production in Alabama has been inversely related for a number of years as shown above. That is, as coal burned by Alabama Power decreases, coal-mining jobs have increased. The two issues are absolutely divorced from one another, much like our opponents’ histrionics are from reality. 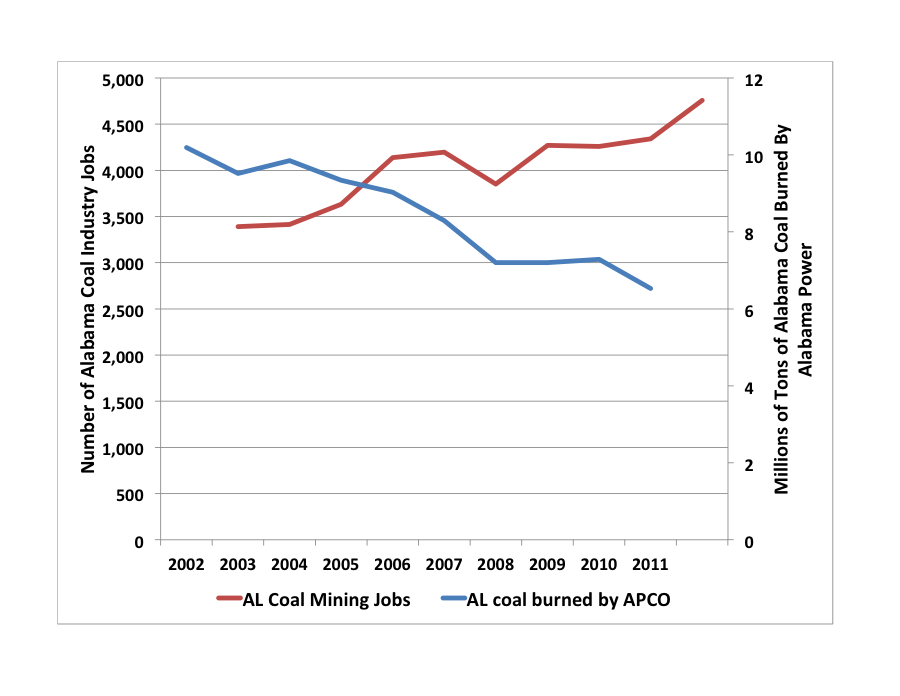 The number of coal mining jobs in Alabama has actually had an inverse relationship with the amount of coal burned by Alabama Power Company. The Alabama coal industry has nothing to do with Alabama Power’s rate-setting or energy planning processes.

The rate hearings are about just that. These attempts to misdirect the public to straw-man arguments about the coal industry, “jobs, jobs, jobs!” and other unrelated matters are at the same time clever and patently obvious.

The author also makes the dubious claim that “the hearings were inclusive and welcomed public participation,” citing the fact that we were at the hearings with legal representation. Allowing the public to speak for a few minutes is hardly the same thing as welcoming public involvement. It’s true that we participated; that is public knowledge.

The PSC “informal” hearings for Alabama Power were amazingly formal and Gasp needed expert help. We requested numerous documents from both the PSC and Alabama Power, the vast majority of which were denied. (There goes the transparency argument for the other side.) One must wonder how many Alabamians truly have this luxury independent from advocates like Gasp. Do many members of the public really have the resources to hire representation, travel to Montgomery and take significant time off work just to participate in an informal hearing? That’s doubtful.

Sadly, Alabama doesn’t have a formal, on-the-record process that allows meaningful public involvement when setting the price you pay for electricity. Even the Wall Street Journal noted the “lucrative rate agreement that [Alabama Power] brokered with state regulators 30 years ago.” That same report in the WSJ says, “Households getting electricity from Alabama Power Co. are using 6% less than five years ago. But their monthly power bills still have increased by an average of 8% …” 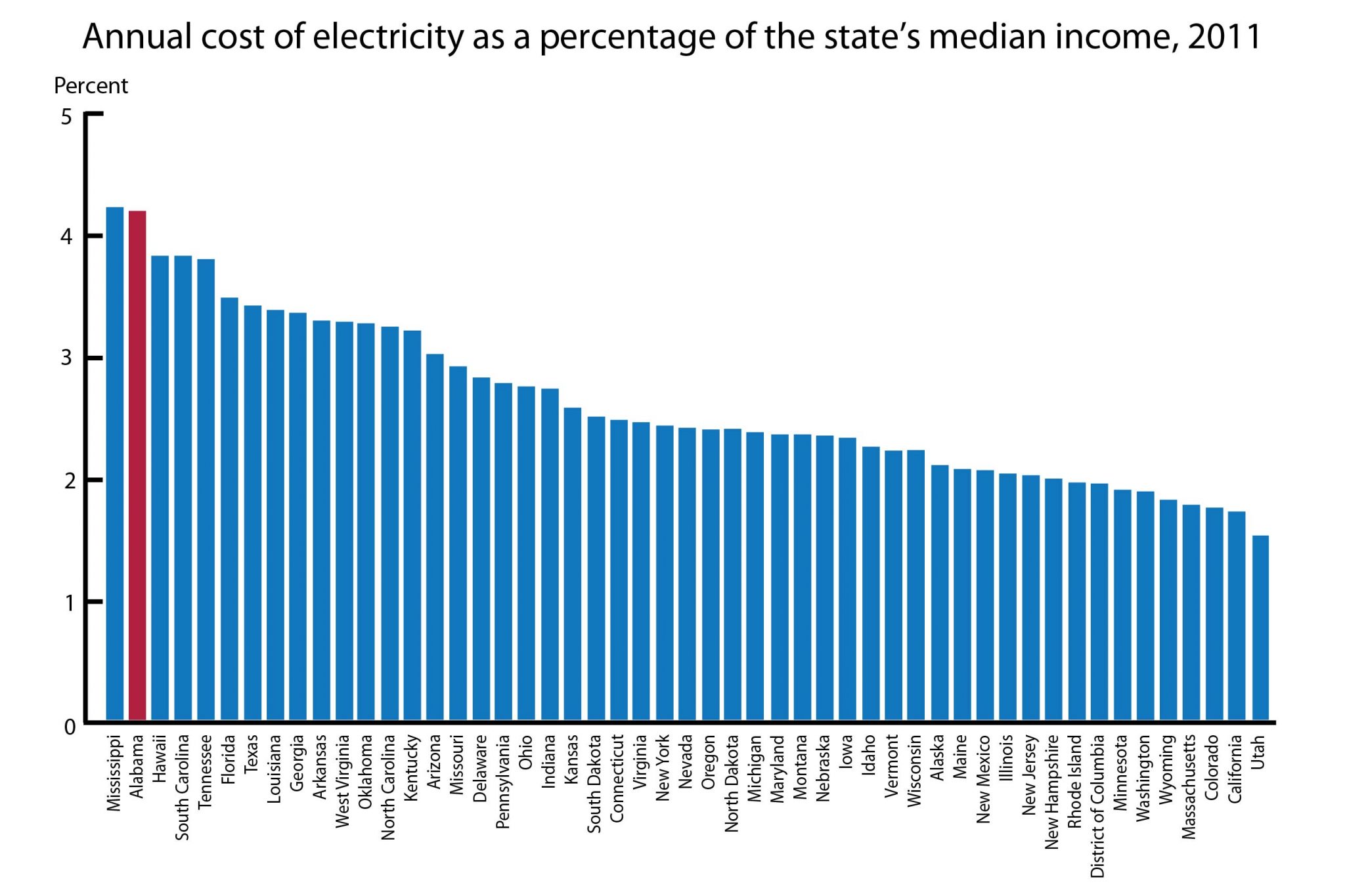 Meanwhile, Alabama ranks at or near the bottom in every significant indicator of well-being, including health and economic development. The only way to get to the bottom of Alabama’s perennial dirty air (and poor health associated with it) is to pull back the veil on the cozy relationships among elected officials and Alabama Power.

And that’s precisely what we are doing. Proudly. Everyone at Gasp cares deeply about the quality of life (or lack thereof) of our fellow Alabamians. We will not be bullied into going along with a system that concentrates money and influence into just a few hands at the expense of the rest of us.

Everyone already knows the truth. As the saying goes, “The emperor is not wearing any clothes.”

Alabama Power, with the consent of our elected officials, has gotten away with overcharging for electricity and the pollution associated with it. It’s time to stop pretending otherwise. They must be held accountable.

And we’re not afraid to say so.