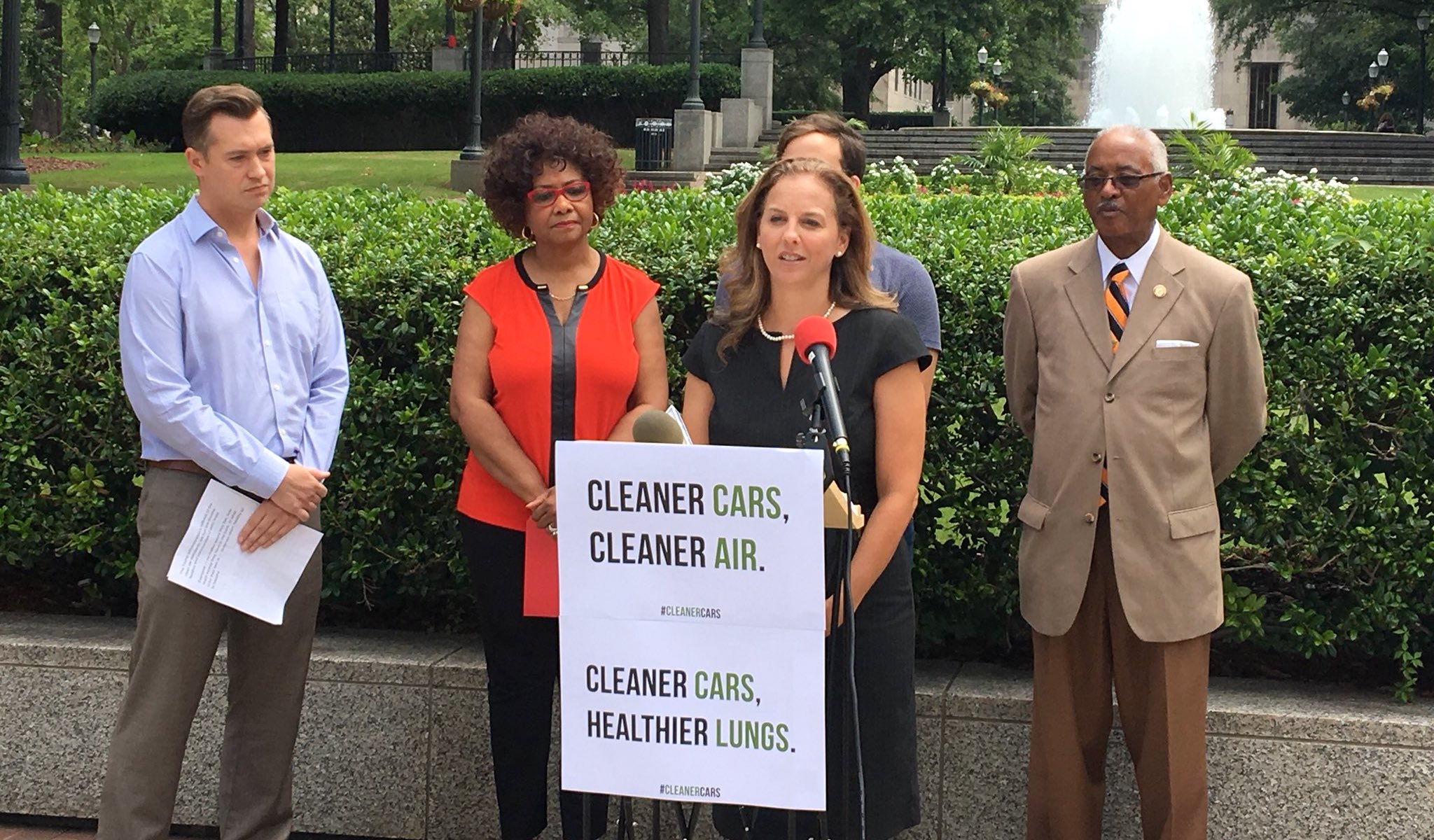 Speakers highlighted the pocketbook savings of the existing clean car standards. If these standards are left unchanged from the strong version put in place in 2012 with the support of automakers, environmental groups, and labor groups, the average Alabama family will save $2,650 at the gas pump over the life of their vehicle. In addition, Alabama could expect 11,900 new jobs by 2030 as a result of the standards.

“Americans overwhelmingly want cleaner, more efficient cars,” said Tammy Herrington, Executive Director of Conservation Alabama. “Making cars that go farther on a gallon of gas is common sense. It puts money back in our citizens’ pockets, lessens our dependence on oil, and reduces the pollution to our air and communities.”

“Only a few years ago, there were red flag warnings about the ozone levels in Jefferson County and metro Birmingham. Children could not play outside, people with breathing disorders were at very high risk from the exposure, and emergency rooms were filling up.” said State Senator Linda Coleman-Madison. “Through clean car standards, people began buying cleaner, more efficient vehicles. Everyone benefited, not just with cleaner air, but consumers saved money at the pump.”

“Clean cars help everyone” said Jefferson County Commissioner George Bowman. “They save money for local governments and protects our citizens’ health while helping to keep the global environment clean.”

Headquartered in Birmingham, Gasp is a 501(c)(3) nonprofit health advocacy organization working to reduce air pollution in Alabama through education and advocacy. Our vision is a healthy, just, and sustainable Alabama. We strive to educate the public on the health risks associated with poor air quality and to encourage community leaders to serve as role models for clean air and clean energy development.

Below are Gasp Executive Director Michael Hansen’s remarks from the press conference:

My name is Michael Hansen and I am the executive director of Gasp. We are a nonprofit organization working to reduce Alabama’s air pollution through education and advocacy. At Gasp, we talk about air pollution through the lens of health. And that’s because air pollution is the single greatest environmental risk factor for premature death and disease in the world.

“I am here to represent hundreds of Gasp members and thousands of supporters across the Birmingham area who depend on strong public health protections like the clean car standards. Vehicle emissions are linked to a number of serious health problems. For example, it can trigger asthma attacks, exacerbate lung and heart conditions, and even lead to premature death.

“We strongly oppose actions by this administration to stall or roll back the national clean car standards. We cannot afford to go backwards. Rolling back the clean car standards will harm our health, our environment, and our economy. It will allow automakers to make dirtier cars that pollute the air and harm our health. More than half a million children and adults in Alabama suffer from asthma. Those people will be more at risk if we allow these public health protections to be rolled back.

“Not only does the pollution from vehicles hurt us today, but it puts us at risk tomorrow as well. Transportation is now the largest source of carbon pollution in the United States. Carbon pollution is a greenhouse gas, and greenhouse gases cause climate change. Pumping more carbon pollution into our air could lead to more intense and destructive extreme weather events like heat waves, flooding, wildfires and droughts. Rolling back the clean car standards would put millions of lives at risk and jeopardize the health of future generations.

“Finally, I want to emphasize that while air pollution does not discriminate, our policies can and do. In particular, I want to draw attention to the fact that mountains of research has shown that low-income families and communities of color are disproportionately exposed to and harmed by air pollution. Air pollution is especially harmful to children of color. Did you know that black kids are 10 times more likely to die from asthma? The Trump administration’s rollback of the clean car standards will hurt low-income families and communities of color most.

“Everyone — no matter where they live, how much money they have in the bank, or what color their skin is — deserves clean, healthy air to breathe.”