Researchers at the University of Minnesota this week published a compelling report in the journal PLOS ONE on the gaps in exposure to NO2 pollution in whites compared to poor communities and people of color. The results are an alarming call to action.

The research article, “National Patterns in Environmental Injustice and Inequality: Outdoor NO2 Air Pollution in the United States,” examines an issue with which many Birmingham, Ala., residents are all too familiar. The study found that the Birmingham metro ranks in the top 15 urban areas with the largest disparity between whites and nonwhites. 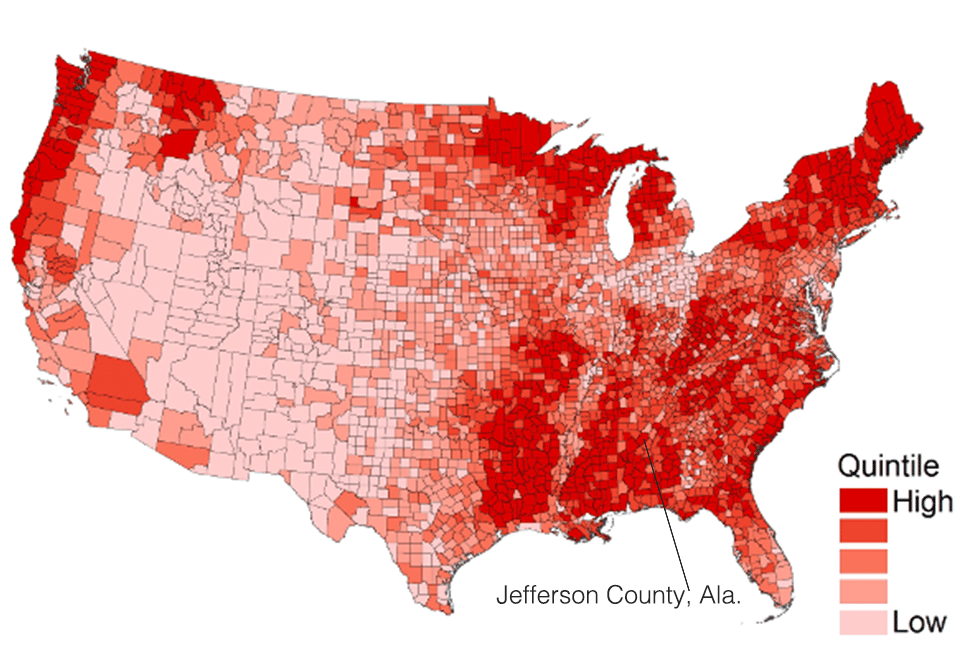 This study comes on the heels of a World Health Organization report that said that air pollution is the results in 7 million premature deaths globally each year, making it the leading preventable cause of premature death.

The UMN research found that if nonwhite populations were exposed to the lower levels of NO2, it would prevent 7,000 deaths from heart disease:

Breathing NO2 is linked to asthma symptoms and heart disease. The researchers studied NO2 levels in urban areas across the country and compared specific areas within the cities based on populations defined in the U.S. Census as “nonwhite” or “white.”

The health impacts from the difference in levels between whites and nonwhites found in the study are substantial. For example, researchers estimate that if nonwhites breathed the lower NO2 levels experienced by whites, it would prevent 7,000 deaths from heart disease alone among nonwhites each year. —

The above map is the 1926 Birmingham racial zoning map, with red representing heavy industry. As you can see by the circled area, African-Americans were made to live inside pockets of heavy industry, and that legacy continues today. Many of the residents of these neighborhoods — such as Collegeville, Harriman Park, North Birmingham and Fairmont — are forced to breathe dirty air and grow gardens in contaminated soil.

Opportunities to get out of these neighborhoods are slim — air pollution soot and odor leave home and property worth little to nothing. Those who live and work in these areas suffer while many of us are completely unaware of the disparity and while others choose to look the other way.

You can join the fight to end this unfair burden by donating to or joining GASP today. We’re hard at work challenging pollution permits, raising awareness about air pollution, working with civic leaders on solutions, and telling your stories. Join today and help ensure we can all enjoy clean, healthy air.

Below, watch the “Toxic City: Birmingham’s Dirty Secret” trailer, which will tell stories about the residents suffering from the unconscionable disparity experienced by poor communities and people of color in Birmingham, Ala.