The U.S. Environmental Protection Agency today released a long-awaited new air quality health standard for ground-level ozone, or smog. This announcement is welcome news for thousands of Alabamians young and old who want to live a healthy life.

The EPA set the new threshold at 70 parts per billion, down from the previous level of 75 ppb set in 2008. Regulated under the Clean Air Act, ground-level ozone is a harmful air pollutant that forms when sunlight mixes with emissions from cars, power plants, and factories. The EPA’s Scientific Advisory Panel had recommended a stronger standard of 60 parts per billion. GASP submitted comments to the EPA in support of the panel’s suggestion.

While we are encouraged by the new ozone standards, the fact of the matter is that better is not good enough. Scientists believe there are still health risks at 70 ppb, especially for vulnerable populations: children, pregnant women, senior adults, people who exercise outdoors, and folks with lung and heart disease. 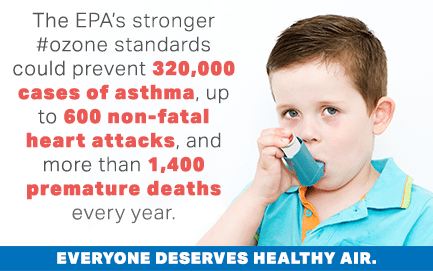 Ozone can trigger asthma attacks that send kids to the hospital. For people living with heart and lung disease, exposure to ozone can be deadly. Ozone every year accounts for thousands of emergency room visits and sick days at work and in the classroom — costing millions of dollars in medical bills and lost productivity.

Who’s at risk in Jefferson County?

Last year, the American Lung Association found that four out of 10 people in the U.S. live in counties that received “F”s in its annual State of the Air report. In Alabama, Jefferson County, home to nearly 700,000 people, continues to receive a failing grade. Under the new standards, Jefferson and Shelby counties would fail to adequately protect public health.

Everyone deserves a chance to live a healthy life and enjoy the economic benefits of clean air. Until the air we breathe is safe for every Alabamian, we still have work to do. 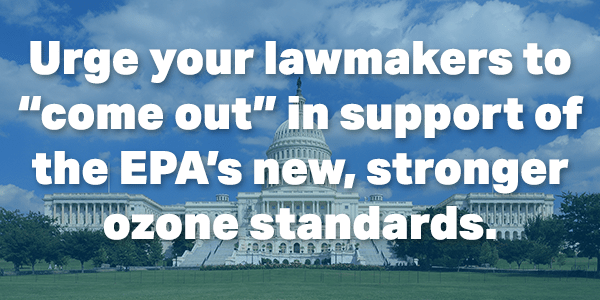 Take action today! Send a message to your lawmakers urging them to “come out” in support of the EPA’s important new protections for public health.