If you’ve been following the North Birmingham corruption investigation involving Drummond Company, Balch & Bingham, and former Rep. Oliver Robinson, you know that our work is a huge part of the story. (Robinson plead guilty on Sept 7.) Yesterday, al.com’s John Archibald reported that newly appointed U.S. Attorney Jay Town is asking for patience in the ongoing corruption investigation — which suggests more indictments may very well be on their way.

We’re trying to do our part to ensure everyone responsible for wrongdoing is held accountable. That’s why we sent a letter to U.S. Attorney General Jeff Sessions asking him to recuse himself from the investigation. His decades-long, lucrative relationships with Drummond and Balch & Bingham could compromise the case, in our opinion, and its better to be safe than sorry.

We are also trying to find possible connections between two $25,000 contributions made to former Alabama Attorney General (now-Senator) Luther Strange by Drummond and actions taken by his office opposing the EPA’s cleanup efforts. On Aug. 23, Gasp attorney David Ludder made an open records act request on our behalf to Alabama Attorney General Steve Marshall. We requested “electronic mail records, letters, or other records of communications” between Luther Strange or any employee or agent of the Office of the Attorney General:

The AG’s office on Aug. 31 denied our request on the basis that our attorney is based in Florida. That’s not how the Open Records Act works, and we promptly let them know that Gasp is indeed based in Birmingham, Ala., and therefore has every right to review the requested communications. As of today (Sept. 18), we have yet to hear back from Marshall’s office. 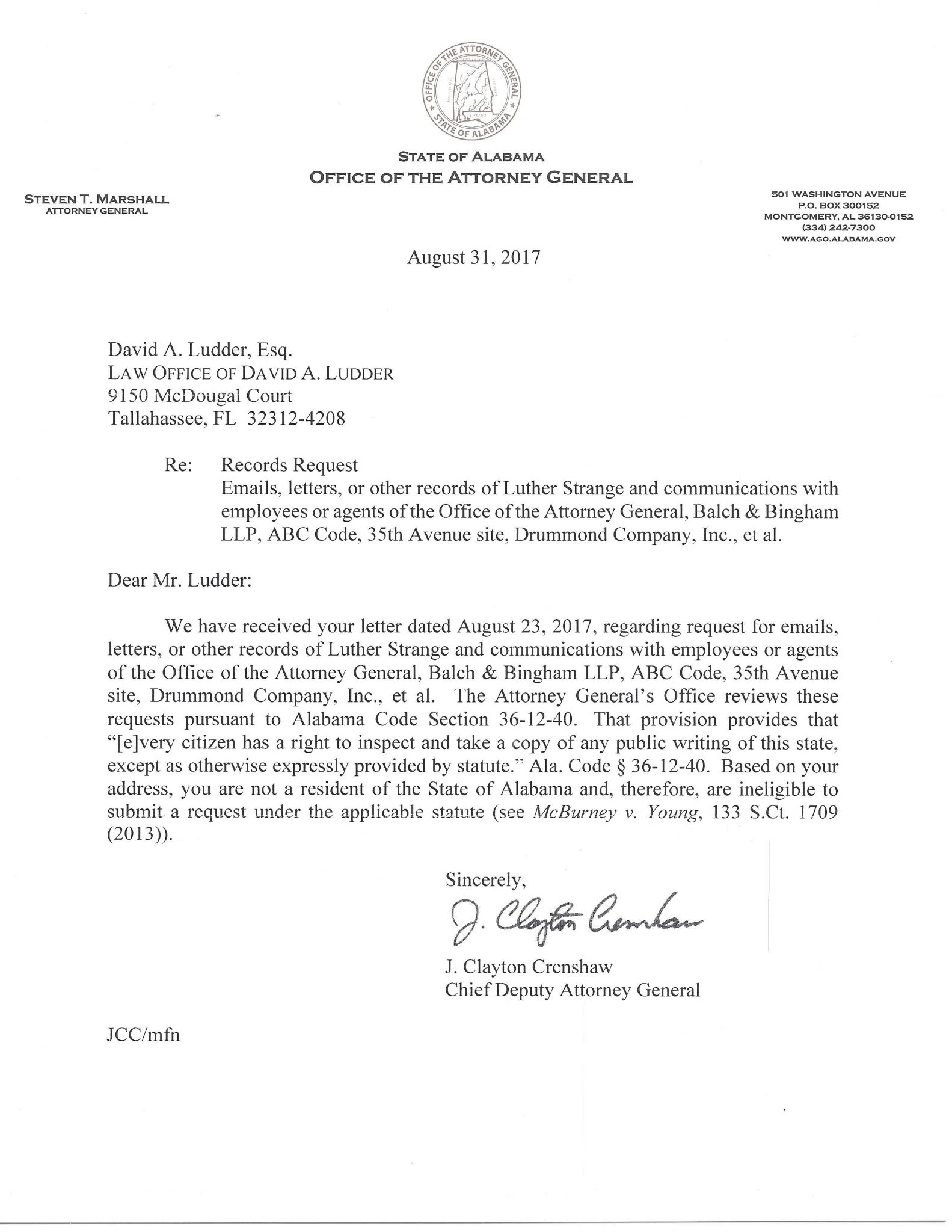 One has to ask, “Is Attorney General Steve Marshall playing politics with our request because he doesn’t want to hurt his predecessor, Luther Strange, in the runoff election on Sept. 26?”

If that’s the case, we’re even more disgusted than we already were. As a 501(c)(3), Gasp is a nonpartisan, apolitical organization. But we have a right to review public records and we shouldn’t be stonewalled for political purposes. Our members deserve answers, and we won’t stop until we get them.