What’s In The Air We Breathe? Understanding Air Toxics & Risk

Birmingham’s air quality has improved since the days when thick orange-brown clouds enveloped the city, but our air is still far from healthy. In the American Lung Association’s 2014 State of the Air report, Birmingham ranked 16th in annual particle pollution and 23rd in high ozone days. Air pollution is typically grouped into two categories: Criteria Air Pollutants and Hazardous Air Pollutants (Air Toxics)

The Clean Air Act requires the U.S. EPA to set emissions standards for what are known as criteria air pollutants. The National Ambient Air Quality Standards (NAAQS) are used to determine the safety levels for criteria air pollutants in the ambient air (the air you are breathing). The six criteria air pollutants are: particle pollution (or particulate matter), ground-level ozone, carbon monoxide, sulfur oxides, nitrogen oxides, and lead. These pollutants can harm human health, cause smog and acid rain, and create other hazards. They are especially harmful for children, the elderly and those with a large variety of existing medical ailments.

You can stay informed on the quality of the air for these pollutants through the EPA’s Air Quality Index (AQI) program. In the summer, when ozone pollution is a concern, some media outlets use the AQI to report “bad air” days. Gasp would like to see media outlets reporting on the AQI year round, since particle pollution (a long-time health hazard for the Birmingham area) can be a problem anytime during the year. Gasp has an Air Quality Widget available for websites, and the American Lung Association has an app you can download to track daily air quality for criteria air pollutants.

“Hazardous air pollutants, also known as toxic air pollutants or air toxics, are those pollutants that are known or suspected to cause cancer or other serious health effects, such as reproductive effects or birth defects, or adverse environmental effects.” U.S. EPA

Although thousands of air toxics exist, the Clean Air Act requires EPA to regulate emissions of 187 hazardous air pollutants. Unlike criteria air pollutants, EPA focuses on technical requirements (technologies available to reduce emissions) of these pollutants, not ambient air concentrations. Therefore, the ambient air is not continuously monitored for the presence of most air toxics. Occasionally, EPA conducts air toxic “studies” if an area is suspected to have high amount of air toxics. Often times little to no action is taken to reduce emissions if an exceedance is found, unfortunately. (For example, in 2013, EPA released the North Birmingham Air Toxics Risk Assessment, which found several exceedences in risk levels for certain carcinogens. The local regulatory agency, however, did not take action to reduce emissions from nearby polluting facilities.)

We are learning more every day about how air toxics can impact our health (including our brains). To provide citizens with information about their risks from exposure to air toxics, EPA has developed a variety of tools that can be used to determine how healthy the air is your city or neighborhood.

TRI tracks the releases and management of toxic chemicals that EPA has determined may pose a threat to human health and the environment. Facilities in different industry sectors must report annually how much of each chemical is released (emitted to the air or water, or disposed in landfill) into the environment.

For example, below is a TRI factsheet for Jefferson County, AL pulled from the TRI website. 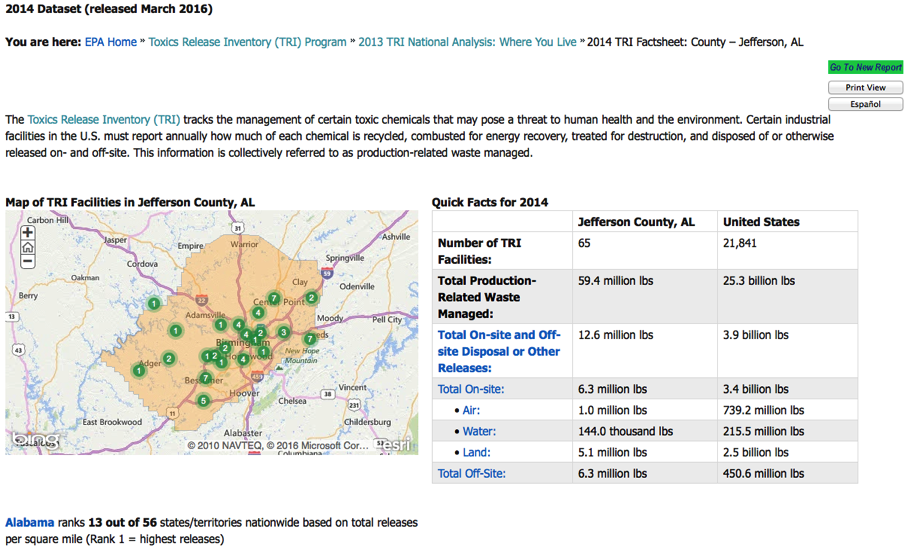 RSEI is a geographically based model that uses information from EPA’s TRI data, three U.S. Censuses, toxicity and properties for more than 400 chemicals, and geographical information for more than 50,000 facilities. All of this information can be downloaded, sorted and filtered by a variety of parameters. The data is used to model the route of each chemical release through the environment, and any potential human exposure that may result.

For example, the top 10 RSEI Hazard (combined cancer and non-cancer toxicity) facilities in Jefferson County (based on 2014 TRI data) are: 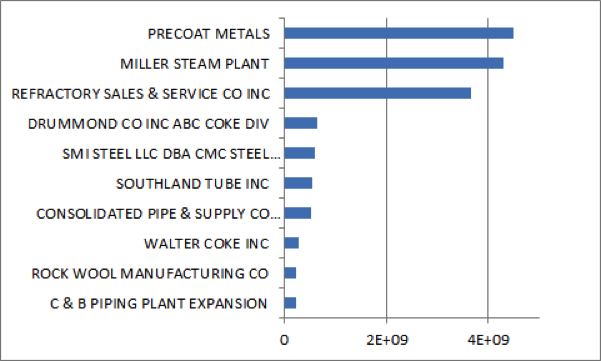 Note: The value of RSEI is to compare the relative hazards and risks created by multiple facilities. It cannot be used to quantitatively determine the estimated health risk of any particular facility).

The 2011 NATA app is a mapping application that displays risks, emissions, and monitoring data for your community on a map.  It also allows the querying and downloading of data.  Map layers include:

When viewing Jefferson County, we can see that many areas within the county have an estimated total risk greater than 100 (dark purple), meaning that the exposure risk is higher than EPA considers to be acceptable. (Note that EPA suggests that this map not be used as the sole resource for evaluating risk, but rather as a guide.) 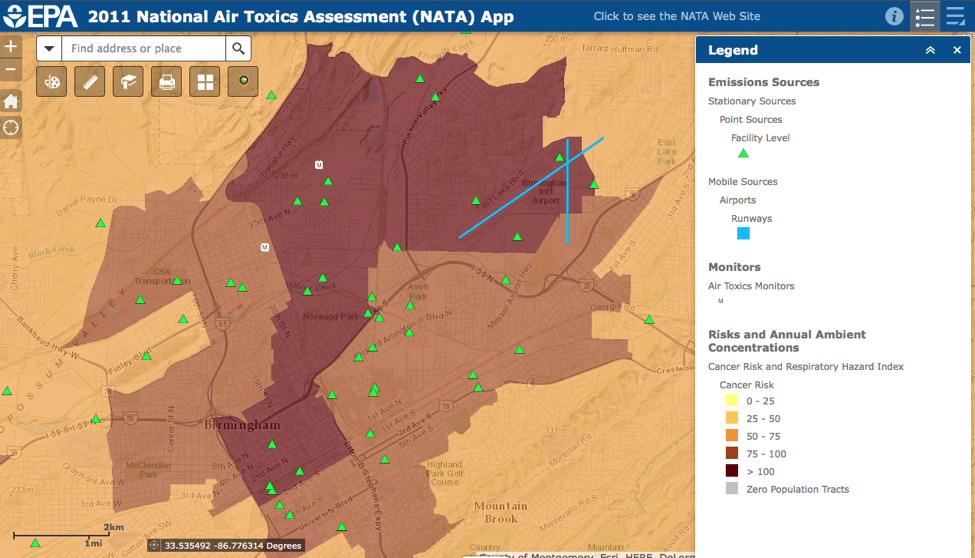 Everyone deserves to know what is in the air they are breathing. Unfortunately, despite the massive emitters of air toxics in the Birmingham area — and the significant risks they pose to our health — air toxics are not often discussed publicly by regulators, nor does there appear to be a will to maximize reductions in this important segment of air pollutants.

To reduce exposure risk to air toxics, Gasp would like to see the following implemented in our county: