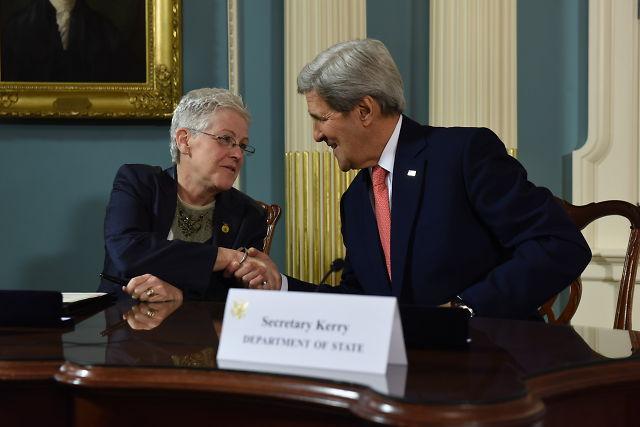 The U.S. Department of State and the U.S. Environmental Protection Agency revealed this week that they are teaming up to launch a “new air quality partnership” focused on fine particle pollution (PM 2.5). The EPA will set up air monitors at U.S. embassies and consulates, which will provide data from around the world for AirNow.gov — the platform we use in our air quality widget.

During a ceremony Wednesday, EPA Administrator Gina McCarty and Secretary of State John Kerry signed a statement of intent. In his remarks, Kerry spoke directly to the problems EPA and State are see

“Environmental challenges like climate change, overfishing, the acidification of our oceans, air pollution – none of these challenges respect international borders. They injure us all, however. They affect people everywhere. None of us are disconnected from these impacts, and certainly the environment writ large is not only not immune, it is at great, great risk today.

“These challenges also have a profound effect on every human being’s health, and over the long term, they can jeopardize the future for generations to come. Kids today, particularly who suffer from asthma and from the remarkable impact of air pollution, are the first subjects. The greatest cause of children in the United States being hospitalized in the course of the summer is environmentally-induced asthma, and it costs us billions of dollars.”

Why are these two divisions of the federal government teaming up? A fact sheet from State explains that the goal is “to reduce health risks from outdoor air pollution” and “offer greater opportunities for the United States to create partnerships on air quality with other nations.”

In 2013, we reported that the World Health Organization now considers air pollution a carcinogen. The WHO said at the time that air pollution contributes to the premature death of 7 million people annually.

Watch Kerry and McCarthy deliver their remarks at the signing ceremony below.