A recent poll shows overwhelming support in Appalachia for a bipartisan bill called the RECLAIM Act that would release $1 billion to create economic development opportunities in coal communities affected by the energy industry’s transition away from dirty fossil fuels. The survey was commissioned by the Sierra Club and the West Virginia Center on Budget and Policy, two groups who support the bill.

Voters in Indiana, Kentucky, Ohio, Pennsylvania, Tennessee, Virginia, and West Virginia were polled; Alabama voters were not polled, but Alabama stands to gain from the RECLAIM Act. The poll demonstrates a broad base of support across demographic and partisan lines. 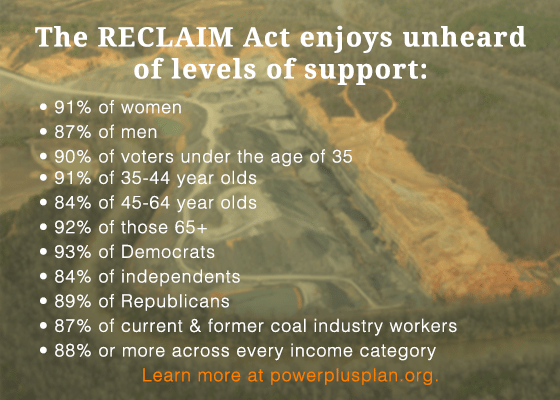 Rep. Hal Rogers (R-KY) introduced the RECLAIM Act in February 2016 and has the support of a large group of bipartisan legislators in the U.S. House of Representatives. It would distribute $1 billion from the federal Abandoned Mine Land Fund to communities and tribes in need.

How would this help put people back to work? For starters, the money could put laid off miners who already possess the skills necessary to reclaim mines. The federal Office of Surface Mining Reclamation and Enforcement believes the bill could create 4,600 jobs to reclaim abandoned mines. In Alabama, four congressional districts stand to benefit: $190 million in AL-4 (Rep. Robert Aderholt); $17 million in AL-5 (Rep. Mo Brooks); $230 million in AL-6 (Rep. Gary Palmer); and $10 million in AL-7 (Rep. Terri Sewell).

Due to several factors — e.g., lower demand for fossil fuels and increased demand for renewable energy — the coal industry has declined over the past decade, resulting in shuttered businesses, thousands of jobs lost, and abandoned mines. Gasp believes the RECLAIM Act could lift up communities struggling economically, and address the environmental problems left behind.

As advocates for clean air and renewable energy, we want to ensure that everyone has a healthy community and a shot at a prosperous future. Nobody should be left behind as as continue in our just transition to a more sustainable economy built on innovative solutions and energy independence.

We urge you to sign on to support this important piece of legislation that could provide a vital economic boost to struggling coal communities across Alabama and the U.S.