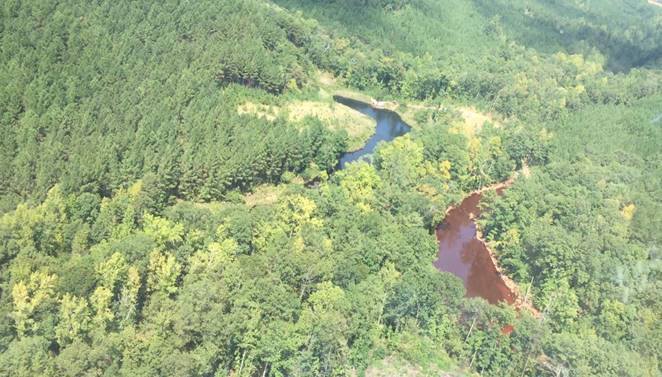 On September 9, 2016, during a routine check of an inactive coal mine in the area, an inspector for the Alabama Surface Mining Commission discovered oily residue on the surface of a retention pond and noted a strong gasoline smell. Colonial Pipeline Company says “Line 1,” which is responsible for shipping 1.3 million barrels of gasoline each day to the East Coast, was leaking underground. It is currently unclear when the leak began, but the line was reportedly shut down within 20 minutes of learning of the potential leak.

The now-closed line supplies the east coast of the United States with up to 40 percent of its gasoline supply. Gasoline is currently being shipped by alternate routes throughout the Southeast. On Tuesday, Colonial Pipeline announced that it plans to test a 500-foot bypass section on Wednesday. If it is operational, it will be connected to Line 1. Colonial also said it should take several days for the fuel delivery supply chain to return to normal.

Our friends at Cahaba Riverkeeper have been doing a great job of updating everyone on the current situation and will continue to do so. They are sampling water alongside EPA and will share results. As of the date of this post, they remain confident that there has been no impact to area drinking water.

Additionally, the EPA is extensively monitoring air quality around the affected area, both to protect the safety of the workers on site as well as the air quality in the surrounding communities.

Gasoline is made from processed crude oil and possesses a strong odor. It evaporates easily, is very flammable and can form explosive mixtures in air. Typical gasoline contains about 150 different chemicals, including benzene, toluene, ethylbenzene and xylene, which also are known as the BTEX compounds.

Many adverse health effects of gasoline are due to individual chemicals in gasoline, mainly BTEX, that are present in small amounts. Breathing small amounts of gasoline vapors can lead to nose and throat irritation, headaches, dizziness, nausea, vomiting, confusion and breathing difficulties.

If you live in Shelby County, especially within 1–15 miles from the Colonial Pipe gasoline spill and have questions, you can contact Gasp through our AirWatch hotline (205-938-4277). If you have immediate concerns about air quality issues in your area, report them directly to the Alabama Department of Environmental Management: