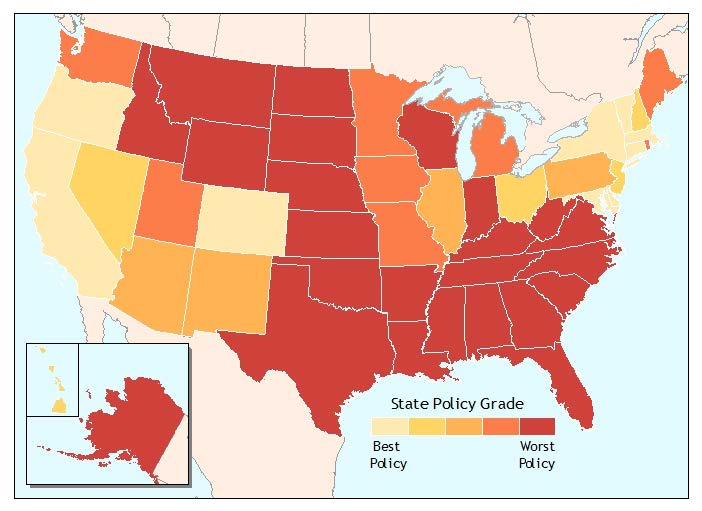 Alabama Gets an ‘F’ for ‘Weak,’ ‘Destructive’ Solar Policies

This is especially detrimental to the growth of the solar energy industry where these 10 states account for more than 35 percent of the total rooftop solar photovoltaic (PV) technical potential in the contiguous United States. These 10 states are underperforming where they contribute only 6 percent of total installed distribution capacity.

“Thanks to weak and nonexistent policies, the distributed-solar markets in these states have never been given a chance to shine,” said Greer Ryan, sustainability research associate with the Center and author of the report. “There’s room for improvement in solar policies across all 50 states, but it’s especially shameful to see the sunniest states fail to lead the transition from fossil fuels to clean, renewable energy.”

Earlier this year, Gasp released a white paper that similarly said “unjustified network use charges for rooftop solar are unfairly burdening residential power customers and stifling the growth of rooftop solar in Alabama.”

Alabama has ample solar potential. Where Alabama ranks 19th in the nation for technical potential for rooftop solar, it is woefully inadequate that Alabama ranks 45th in installed capacity. There is no excuse for consistently ranking near the bottom for both installed solar capacity and solar industry jobs.

Speaking of solar jobs, I hope you’ll join us on Thursday, May 12 at the Carmike at the Summit for a special screening of the documentary film “Catching the Sun.” The event is being hosted by our friends at Energy Alabama. Tickets are just $11.

I urge you to speak out for better policies across the board: at the Public Service Commission, in the Alabama Legislature, through the media, and even with your local utility company. We have tools available to advocate for clean energy on our Solar Works website.