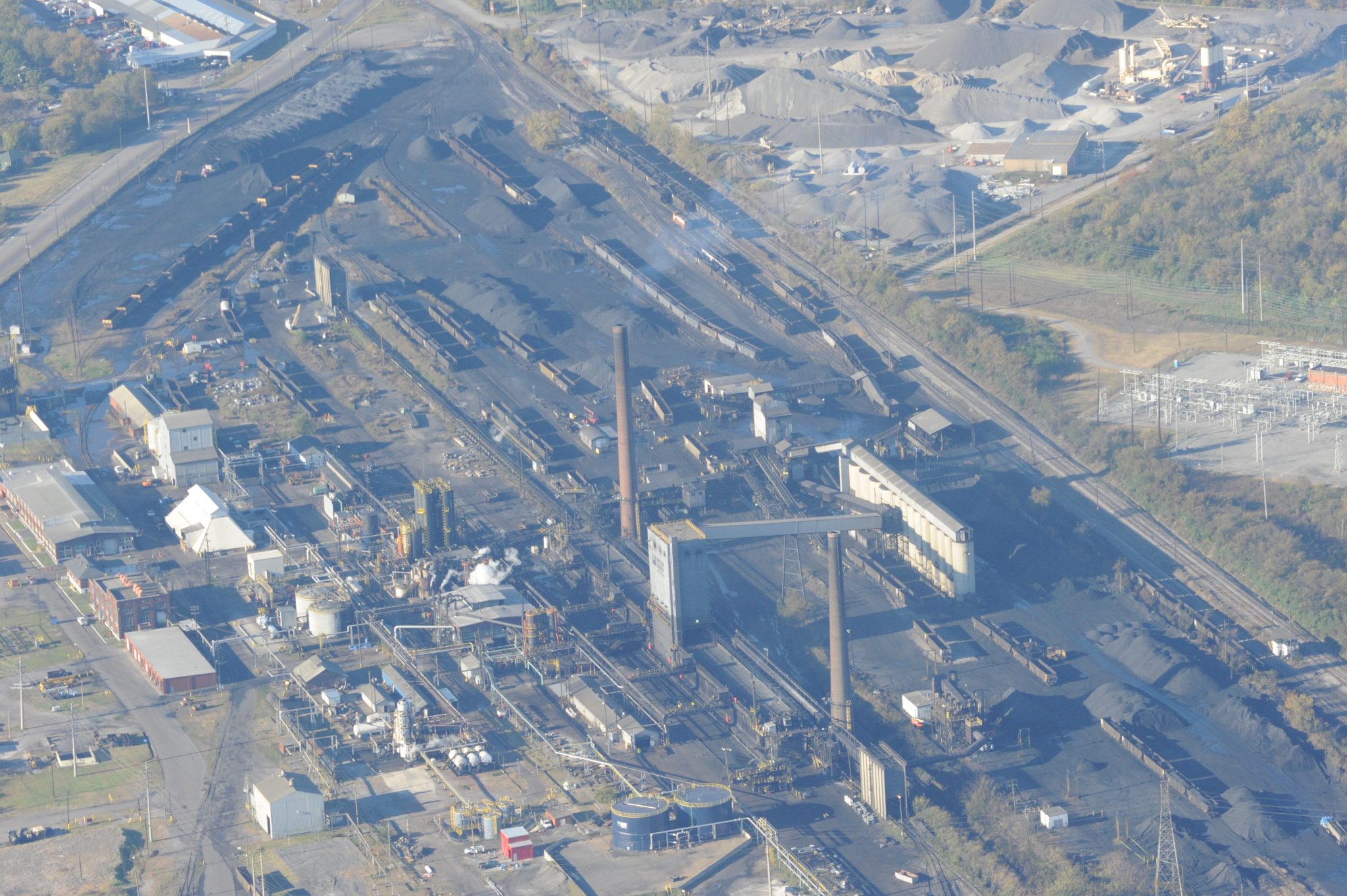 Located in Harriman Park, the plant now known as Bluestone Coke began operating more than 100 years ago as part of the Sloss, Sheffield Steel & Iron Company. Today, it’s the center of the 35th Avenue Superfund Site.

The plant has changed ownership and names several times. More recently, it was called Walter Coke until 2016 when it was bought and renamed ERP “Compliant” Coke. It was acquired in 2019 by Bluestone Resources, which is owned by the family of West Virginia Governor Jim Justice.

Last month, the Jefferson County Department of Health announced a lawsuit against Bluestone Coke over numerous violations of air pollution regulations. (JCDH is the regulatory agency that enforces the Clean Air Act and Alabama Air Pollution Control Act in Jefferson County.) Bluestone Coke received a notice of violation (NOV) in 2020 from JCDH, and it has failed to fix many of the issues cited.

This is not the first time the facility has been accused of noncompliance with environmental regulations. The plant has been operating under an administrative order from the U.S. Environmental Protection Agency since 1989 after several water and hazardous material violations were noticed. The EPA website lists several additional orders since then. As part of the same 2011 investigation by the National Enforcement Investigation Center that resulted in the Consent Decree with ABC Coke, violations at the byproducts plant at then-Walter Coke were also found.

As a result of the 2020 NOV and subsequent inspections in 2021, JCDH also formally denied Bluestone Coke’s application for a renewal of its Title V Operating Permit, which is required for all major sources of air pollution. We challenged this same operating permit for then-Walter Coke in 2014, but that case was mooted when ownership changed hands in 2016.

Typically, the denial of a permit would require the facility to cease operations immediately. However, Bluestone appealed that decision and received a stay of the order — meaning it can continue to operate until further notice.

On Friday, September 10, GASP filed a motion to intervene in the matter of Bluestone Coke’s air permit. We seek to ensure the interests of our members and residents of the adjacent neighborhoods are adequately considered.

Operating Without a Business License

Speaking of noncompliance, we recently discovered that Bluestone Coke does not appear to have a business license with the City of Birmingham. We sent a public records request to the City’s public information office for the company’s business license on July 30, 2021. However, an executive administrative assistant to Mayor Randall Woodfin wrote back that, “the information you are seeking is not deemed public record.” We were able to confirm the company’s lack of a business license by calling the division that handles licenses directly.

Similarly, we contacted Jefferson County revenue department. They confirmed that Bluestone Coke does not have a current business license and owes the County more than $14,000.

It is unlawful to operate a business in Birmingham without a business license(s), regardless of the status of the company’s air permit. We are collecting signatures on this petition asking the City to enforce the business license requirements.

We have been concerned with emissions from this facility since day one. The plant is a source of particulate matter, sulfur dioxide, nitrogen oxides, and volatile organic compounds. In particular, we have been worried about hazardous air pollutants, or air toxics.

In 2019, we collected ambient air samples along the fenceline of Bluestone Coke using summa canisters. The lab analysis showed what we suspected: elevated levels of benzene and naphthalene, two toxic air pollutants associated with coking. Benzene is a known human carcinogen linked to leukemia; exposure can cause headaches, dizziness, lightheadedness, nausea and vomiting, as well as eye, skin, and respiratory tract irritation. Naphthalene is a suspected carcinogen; acute exposure can cause coughing, wheezing, headaches, fatigue, confusion, tremor, nausea and vomiting.

As a result of this first sampling project, we decided to look into the matter further. We used EPA Method 325, which was developed by EPA scientists to describe how to collect and analyze pollutants like benzene at or inside a property boundary using sorbent tubes. Method 325 was designed for oil refineries, which have “fenceline monitoring provisions” (40 C.F.R. § 63.658) that use sorbent tubes to monitor for air toxics like benzene.

The rule for oil refineries pertains to facility compliance, which means that the refineries install the sorbent tubes within 50 meters (about 162 feet) of the tanks. We knew we would not be allowed access to Bluestone’s property, so we had to do our best to approximate emissions from Bluestone.

Using Method 325 as a guide, we used sorbent tubes to collect ambient air samples six times at six different locations. Those samples were analyzed by a lab for pollutants. The analysis again showed elevated levels of benzene and naphthalene, among others. 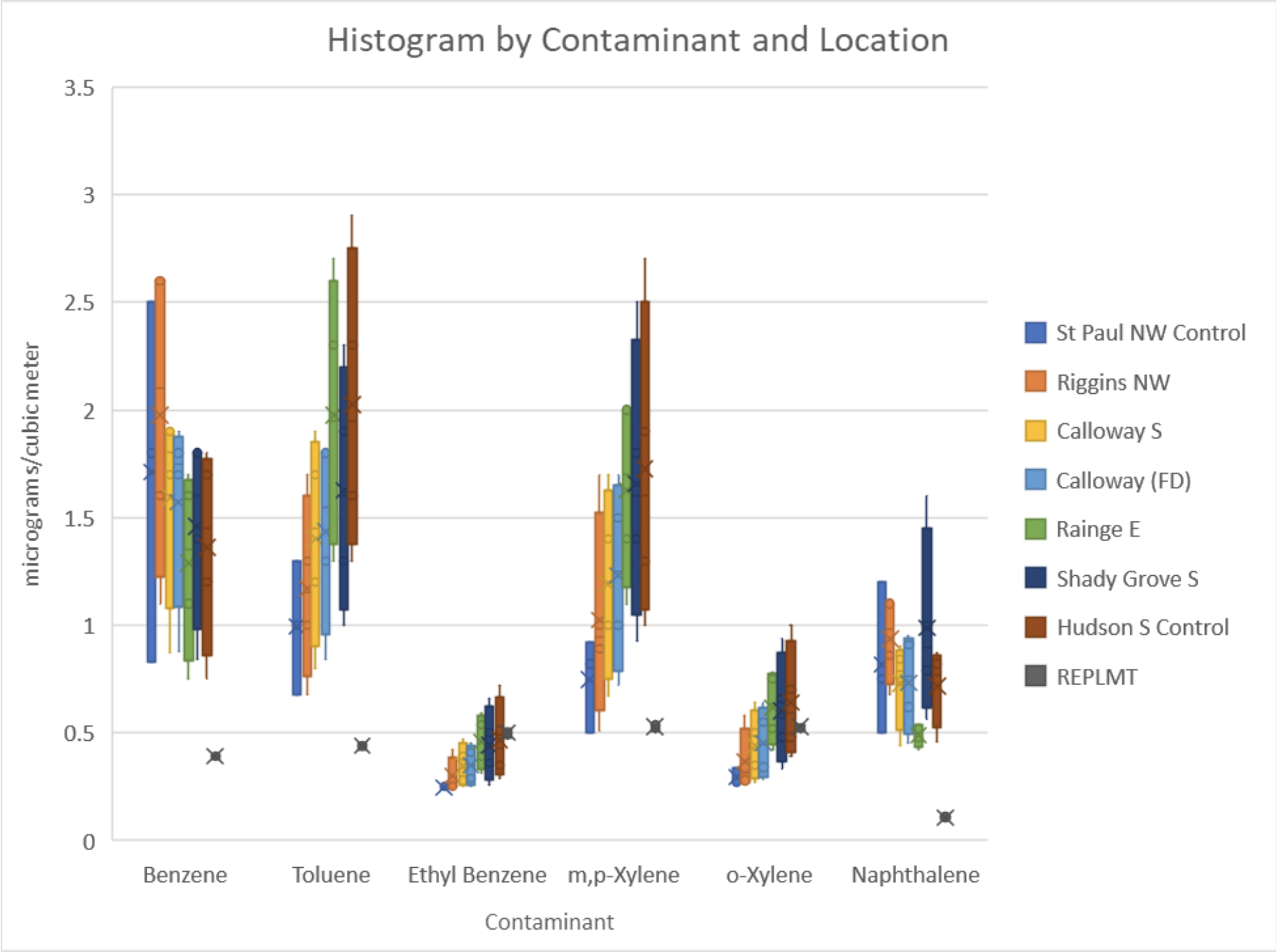 In the chart above, there is a “report limit” (REPLMT) for each pollutant. These roughly correspond to the EPA’s regional screening levels. As you can see, the concentrations of benzene and naphthalene exceeded the report limit at every site, every time. All of the sampling data is available in Google Drive.

Remember, it’s difficult to translate what we found using Method 325 on its own. So, we have to adjust and use math to interpret our results.

A little about what the Fenceline Monitoring Rule itself says about the levels of air toxics found in the sorbent tubes:  The units of measurement are µg/m3. This means the concentration of an air pollutant in micrograms (one-millionth of a gram) per cubic meter air or µg/m3. If you are at least 1 µg/m3, then the Fenceline Monitoring Rule considers it at a semi-noteworthy level. In other words, if you are at 0.9 or below, then you invoke a new requirement where oil refineries can test less frequently. If you reach greater than 9 µg/m3 then the refinery shall conduct a root cause analysis and corrective action. Basically, the range is >1-9 µg/m3, with 9 and above being the worst.

GASP found levels for benzene close to 3 µg/m3; toluene levels between 1 and 2 µg/m3; and naphthalene levels over 1 µg/m3.

If you consider the fact that the closest sorbent tube is about 1,500 feet away from Bluestone Coke, these results are concerning. If you adjust for the distance from which we placed our sorbent tubes, it is likely Bluestone’s pollution problem is significant and may even be over 9 µg/m3 at certain points at and inside the property boundary. In other words, if Bluestone were an oil refinery, they might have to perform a root cause analysis and take corrective actions.

We reached out to some experts to help us put this information into easily understandable terms, including Wilma Subra (Subra Company) and Stephen Lester and Mihir Vohra (CHEJ).

It is clear then, that people in North Birmingham are being exposed to toxic chemicals that affect their health. However, EPA does not have a health-based standard for exposure to either benzene or naphthalene in ambient air, so the actual health risks are uncertain. While EPA’s RSLs provide some guidance on risk estimates, these values only consider chemicals in isolation, or when exposed to one chemical at a time. In reality, people are exposed to multiple chemicals throughout their lifetimes. In this case, a round of air testing over 3 months showed that North Birmingham residents are exposed to at least six volatile organic chemicals. Exposure to multiple chemicals may have cumulative effects on human health that are difficult to predict. Chemicals may interact in the body to yield additive or synergistic health effects. This may be of particular concern in North Birmingham because exposure to both benzene and naphthalene pose a cancer risk, and the combined effect of exposure to both chemicals is likely to pose a cancer risk that is at least as great as exposure to the two chemicals combined, though it may be even greater.

According to Wilma Subra:

The human health impacts of these chemicals are extensive and severe, and the cumulative impacts associated with exposure to all of the very toxic chemicals monitored and known to be released into the air by the Bluestone Coke facility operations, can have resulted in and will continue to cause unacceptable acute and chronic health impacts to community members in the area of the facility.

To summarize, this affirms what we have been saying all along: there is a significant amount of air toxics in the ambient air attributable to Bluestone Coke.

We are therefore calling on EPA, JCDH and/or the City of Birmingham to shut Bluestone Coke down unless and until they can comply with all applicable laws and regulations.