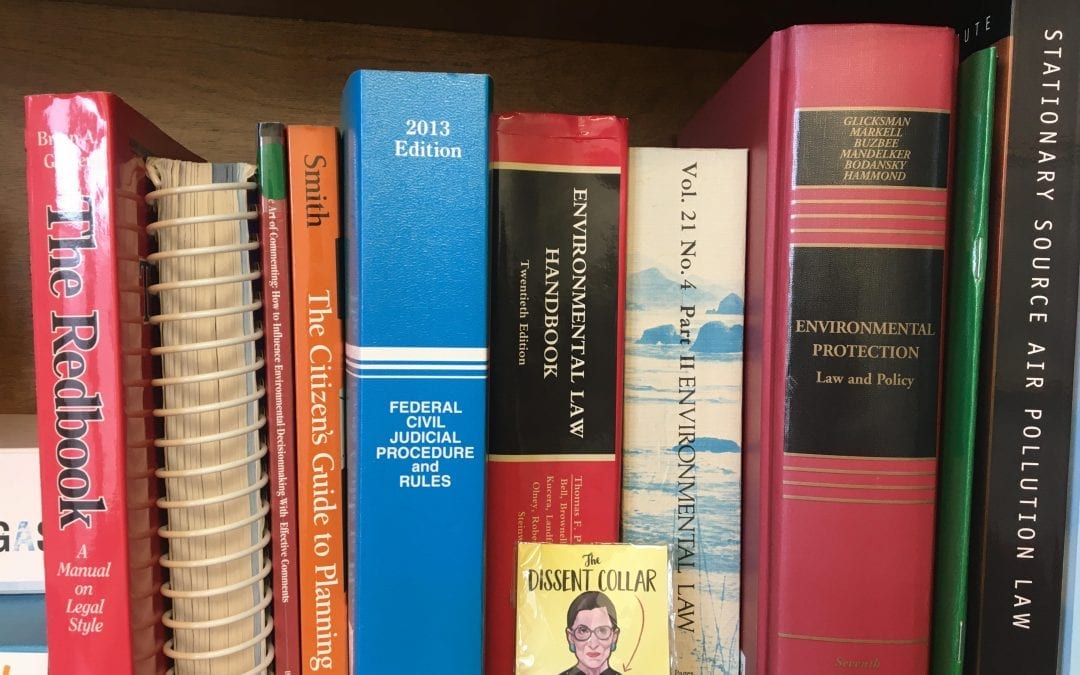 As I mentioned last time, the bills we are most interested in are HB36 and SB57. I blogged about their practical implications last time. Here are the updates on their movement:

David Ludder, an experienced environmental attorney who also works with Gasp and other environmental groups, suggests two improvements could be made to SB117.  The first is that ADEM should be required to demand that landfill operators demonstrate that proposed alternative cover materials will be as effective as soil in controlling odors, disease vectors, fires, scavenging, and littering as soil AND that it not be waste materials.  Second, SB117 should be revised to prohibit approval of alternative cover materials where the closest residence is within one mile of the landfill facility boundary.  That distance will significantly ameliorate concerns about offensive odors and disease vectors.

A hearing is scheduled at the Alabama Public Service Commission on the Alabama Power gas plant expansion (you can weigh in here to let the PSC know you don’t support this gas expansion) for March 9 starting at 10 AM. The hearing is likely to take several days and may run through March 12.

Sponsors of the EJ For All Act plan to introduce the bill tomorrow (Thursday, February 26, 2020). For any of you reading this in D.C., supporters are invited to a press conference from 10:00 A.M. to noon Eastern in the hearing room in Longworth 1334.

The bill has some of the same components as the Booker/Ruiz bill, including a right of action to go to court for violations of Title VI of the Civil Rights Act and agency regulations, amendments to the Clean Water Act and Clean Air Act requiring consideration of cumulative impacts in permitting, and enshrining the requirements of the EJ Executive Order into statutory law.

Initial principles for the bill online for comment, with a draft of the bill that you can see here. There are instructions of how you can get directly involved in this process as well. Be on the lookout for an action alert from Gasp about the EJ for All Act too!

So far, the bills we are most interested in are HB36 and SB57, but I’m sure more will come. There hasn’t been movement on either of these this week, but we wanted to go a little deeper into the practical implications of both.

This week, AL.com columnist Kyle Whitmire wrote about the sad state of affairs of the public’s ability to get public records, and mentioned several times Gasp’s issues in getting public records from various entities in Alabama. Sen. Ward’s SB57 still has not moved since it was introduced last week.

You have the opportunity to talk to elected officials and help weigh in on policies you want to see at these upcoming events:

The big news this week is Cam Ward introduced SB57, which would repeal and replace Ala. Code § 36-12-40 and § 36-12-41 (the Open Records Act). As the synopsis reads: “This bill would repeal existing law providing access to public records and replace it with a new Alabama Public Records Act with provisions establishing the rights of citizens to access public records, enumerating exceptions to disclosure, establishing procedures for making and responding to requests for access, setting the charges associated with responding to requests, establishing a Public Access Counselor within the Alabama Department of Examiners of Public Accounts, creating administrative and judicial remedies, and establishing civil penalties for noncompliance.”

We will update you more in the coming months, but we have previously posted about Gasp’s issues in getting public records from various entities in Alabama. We are actively following developments in SB57 and will keep you all updated as well.

This week, Birmingham City Councilor Clinton Woods (District 1) announced that he is hosting a conference to discuss the feasibility and details of Birmingham being connected to the high-speed I-20 eXpress line that will eventually stretch from Atlanta to Dallas.  The conference will be March 19, 2020 at the BJCC. You can read more here.

A final rule was published in the Federal Register this week (85 Fed. Reg. 24 (February 5, 2020)) affecting processes and content for Petitions to Object to Title V permits (Title V petitions). The final rule, which goes into effect April 6, 2020, basically does 3 things:

This is a helpful graphic on the lifecycle of a Title V permit and where Petitions to Object fit in. We have blogged about this before here, and you can also read our Petition to Object to ABC Coke’s permit that we submitted to the EPA Administrator in June of 2019 here.

Woah. I have not written a blog post in so long. 2019 was jam packed (so far, 2020 still is…), and my legislative updates fell by the wayside. I’m sorry to leave all of you hanging for a year. But I’m back! A couple of my New Years Resolutions are to 1) start up this blog series again (checked that box off as of today, yes!) and 2) start doing more work in mine and my family’s life to tackle climate change (I’ll update you all on that periodically too).

So, I’m doing this a little differently this year. We’ll have a section for air permits, state legislation, local (greater Birmingham area, typically) policy, and federal legislation and policy. You can know that anything checking at least one of these boxes will be something I’ll update you on here:

So, now that I’ve apologized for my absence (and promised you I’m back) and let you know what to be on the lookout for, let’s dive in.

The legislative session begins February 4, 2020. There are already some prefiled bills we are watching before the session kicks off next week. For right now, while the list is small, it will stay here. But as it grows, we will keep it in a word document and link to it, and just hit the highlights in the post itself.

Following the ever-evolving aftermath of the criminal corruption that kept the 35th Avenue Site off the National Priorities List (NPL), Gasp and PANIC have been working tirelessly to get the site listed (albeit, 2 criminal convictions and six years later).

So, we know EPA is rolling back too many things to count. Our friends protecting our water have been especially busy. We will let you know of any more rollbacks impacting efforts to address climate change, mitigating air pollution and improving air quality.

While no piece of legislation is perfect, and we hope for some improvements, it is good to see Congress legislating to address climate change. The CLEAN Future Act would transition the United States to 100% clean energy across the entire economy by 2050, addresses environmental justice issues and includes a national clean energy standard, among other things. 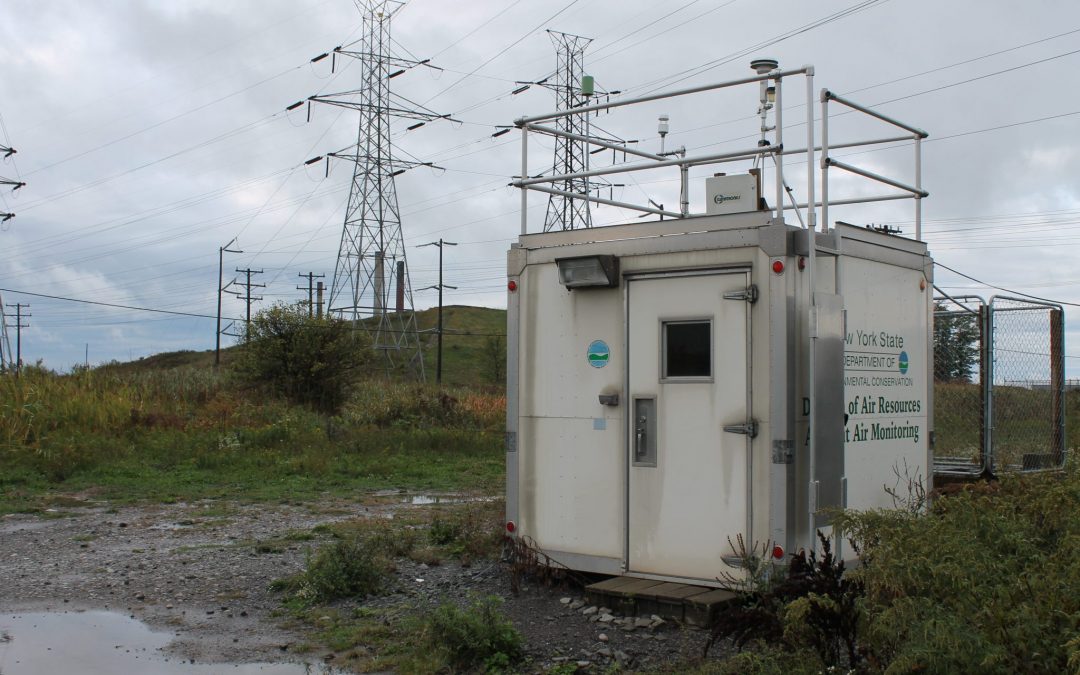 Every year Gasp comments on the Ambient Air Monitoring Plans put out by ADEM and JCDH. These plans contain any changes that either ADEM or JCDH plan to make to their ambient air monitoring network in that year. The plans are subject to public comment and EPA must approve the Plans.

According to a recent article, the gains the U.S. has made in improving air quality have decreased over the past 2 years. “There were 15% more days with unhealthy air in America both last year and the year before than there were on average from 2013 through 2016, the four years when America had its fewest number of those days since at least 1980.” The American Lung Association ranked Birmingham 14th worst city for year round small particle (PM2.5) pollution. 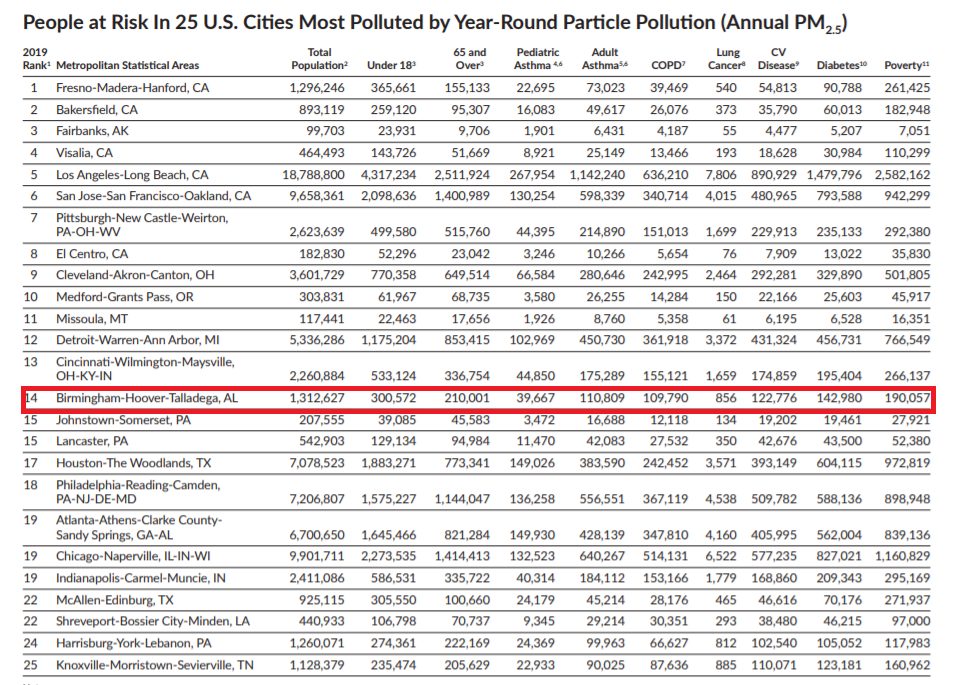 This year, Gasp is asking for more monitoring. Specifically, for monitors to address the Acipco-Finley neighborhood’s concerns about emissions from scrap metal recycling facilities in their neighborhood and for a dedicated fenceline SO2 monitor for ABC Coke. These are very specific requests that could not only give a clearer picture of air quality in these communities, but such information gives residents the power to make their communities and air healthier.

Information is power. A robust ambient air monitoring network, with monitors placed in the right places (short version: the “right places” are in hot spots of pollution, not far away from them), gives people critical information about the quality of the air they breathe. This is why weighing in on JCDH’s Ambient Air Monitoring Network Plan for 2019 is a crucial part of advancing healthy air and environmental justice.