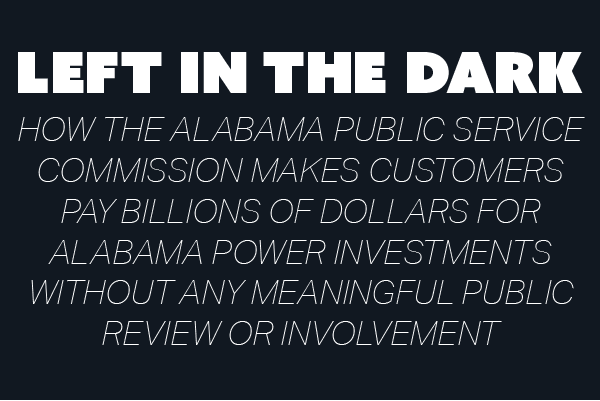 A study released today by the Institute for Energy Economics and Financial Analysis (IEEFA) confirms what GASP has been saying for the past two years: lack of transparency by the Alabama Public Service Commission hurts consumers.

“The Alabama PSC ‘regulates’ Alabama Power Company’s IRP and its related resource-planning decisions without allowing the company’s customers any meaningful opportunity to participate or even see what’s going on,” Schlissel writes.

The report, “Left in the Dark,” was prepared by IEEFA’s David Schlissel for GASP, Southern Environmental Law Center, and Southern Alliance for Clean Energy. Schlissel details how the “PSC’s cursory and opaque regulation of Alabama Power’s investments differs from the public reviews made by state regulatory commissions in other southern states and by the Tennessee Valley Authority’s extensive public IRP process.”

Integrated resource plans, or IRPs, are used by utility companies like Alabama Power and the TVA to determine the least-cost way to meet supply-side and demand-side forecasts for energy production and consumption. In other words, power companies analyze future demand and how to meet that demand through investments in power sources (whether it be coal or gas or solar) and energy efficiency measures.

“The lack of transparency in the Alabama PSC’s IRP process for Alabama Power leaves customers and advocates like GASP in the dark, which ultimately has an impact on air quality and our health,” said Haley Colson Lewis, GASP program manager.

“In other states, like Georgia, and even in TVA territory in Alabama, consumers and advocates are able to weigh in on utility company decisions. A more transparent IRP process would mean the public would be able to weigh in on whether or not the ways in which Alabama Power produces and generates electricity truly consider the health and pocketbooks of Alabama citizens.”

GASP is advocating for open and transparent energy planning in Alabama because where electricity comes from has a direct impact on the quality of the air we breathe and, therefore, our health. Not only do energy planning decisions affect our health, but the lack of transparency also has an impact on our economy.

Instead of hiding behind closed doors and investing in outdated, dirty fuels, the Alabama PSC should be looking for ways to move Alabama towards cleaner, more sustainable energy choices like wind and solar.

To remedy these problems, the report recommends, among other things, the following: